The results of Cisco’s IoT Value/Trust Paradox report show that, while most consumers believe IoT services deliver significant value for them, very few understand or trust how their IoT data is being managed and used. This conclusion has revealed an interesting paradox: despite their lack of trust in IoT data security, consumers on the whole say that they are unwilling to disconnect from IoT services, even temporarily. 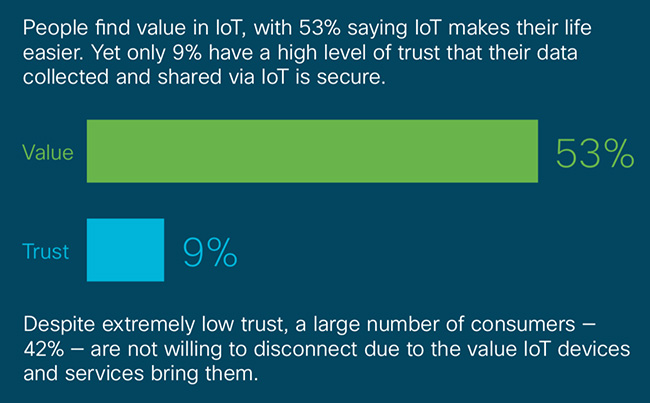 These findings indicate that we are approaching the point of no return at which consumers irrevocably commit to IoT being an integral part of their lives. IoT is becoming so deeply integrated into consumers’ daily experiences that it is easier to tolerate uncertainty and risk than to disconnect.

While the survey reveals that consumers are willing to accept risk and trade off value for trust, they do so reluctantly. Their desire for transparency and visibility into how their data is being used remains strong. Companies that can resolve the paradox for their customers have the opportunity to accelerate and sustain the growth of their IoT businesses.

More than twice as many consumers recognize personal IoT devices than public ones. When consumers were provided with a broad list of devices and asked to identify which were part of the Internet of Things, 63 percent on average correctly identified personal IoT devices (wearables, home security systems, and so on), while only 27 percent were aware of public IoT implementations (street lighting, energy meters, traffic systems, and so on).

While consumers are seeing increasing value in IoT services, they are very concerned about the security of their data and how it is being used. Only 9 percent of respondents say that they trust that their data collected and shared through IoT is secure. And only 14 percent feel that companies do a good job of informing them what data is being collected and how it is used.

Consumers value IoT, but don’t trust it. Despite this lack of trust, they are not willing to disconnect: 42 percent said that IoT is too integrated into their daily lives to disconnect from these devices and services, regardless of the perceived risk.

“As more companies build their businesses around IoT services, they need to first understand the importance of educating customers on how they are using their data to deliver new, valuable services that will enhance their lives,” said Macario Namie, Head of IoT Strategy at Cisco. “Consumers are asking for more visibility into IoT data practices, and to increase transparency around your IoT data governance and management, you first need to be able to determine who gets what data, where and when. Today’s IoT platforms solve for this problem and can give you the ability to enhance consumer confidence and trust, which can lead to greater adoption of your IoT services.”

Cisco recommends that businesses use these insights and implement the following steps to address the gap between value and trust in IoT:

Establish a clear, concise data policy and share that with your users: Companies must be able to provide transparency into how they are using and securing data and how this helps to improve their customers’ experiences.

Take granular control of your data: To increase transparency around IoT data governance and management, companies first need an IoT platform that can help determine who gets what data, where and when.

Create accountability throughout your IoT value chain: Companies must evaluate all the providers in their IoT value chain and put IoT solutions in place to enforce minimum security standards and requirements so they can hold each provider accountable.