If companies fail to make artificial intelligence (AI) a core competency within the next five years, they will face either stagnation or elimination. 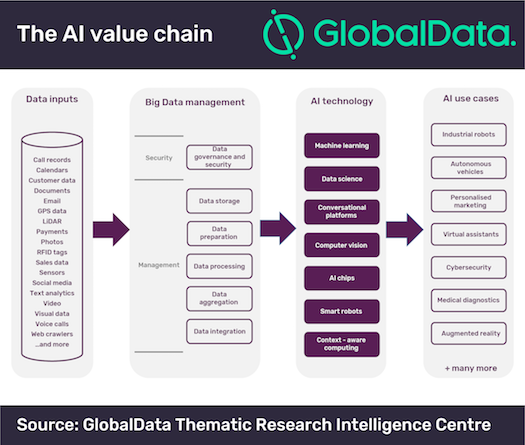 Recent GlobalData research reveals that incumbents in virtually every industry are facing some kind of game-changing disruption from AI technologies, with some being better prepared than others for the challenges ahead.

“AI is finally beginning to have an impact on the global economy. This technology has the potential to transform how we live and work at an extremely rapid rate and it is already beginning to have an effect across industries, with well-established incumbents increasingly coming up against major disruption from AI platforms developed either by the tech giants (including Amazon, Google and Microsoft) or by AI-focused start-ups,” said Ed Thomas, Senior Analyst, Thematic Research Technology at GlobalData.

The hype around AI should not obscure its importance

Proponents of AI believe that it has the potential to transform the world as we know it. While this kind of hyperbole may not be entirely helpful it should not obscure the fact that, within five years, AI will be essential to the survival of businesses of all types.

Thomas continued, “Google’s CEO has compared AI to electricity and fire in terms of the impact it will have on the world. Claims of this kind can seem overblown, particularly as the technology in use today often struggles to meet such lofty expectations. However, AI is already having a significant impact on our day-to-day lives and its usage will only increase over the coming years. Companies that don’t embrace AI risk being left behind.”

The global technology giants lead the way in AI development

Google, Amazon, Microsoft, Facebook and IBM are the market leaders due to a combination of factors, including access to huge datasets and significant amounts of computing power.

Thomas added, “AI is still in its infancy and today’s ‘state of the art’ will seem rudimentary within a decade. Consequently, when identifying winners in the AI sector, it is just as important to gauge a company’s ability to innovate over the long-term as it is to evaluate the current state of their AI offerings.”

China’s tech powerhouses will challenge the dominance of US companies

The next few years will see massive investment in AI from both the Chinese government and the country’s businesses, boosting the competitive capabilities of the likes of Baidu, Alibaba and Tencent.

Thomas concluded, “The US-headquartered tech giants are currently setting the pace, but they will face increasing competition from Chinese firms like Baidu and Alibaba. Baidu boasts a world class team of AI specialists, while Alibaba’s progress in AI was highlighted by its recent success on a Stanford University reading comprehension test, where it outscored humans.”