Apple has released new versions of iOS, watchOS, tvOS and Safari and has plugged a number of security holes in each.

iOS 12 comes with improved usability, stability, reliability, speed, but also with some interesting new and improved features that should help users choose and manage passwords and use two-factor authentication.

Apple software engineer Ricky Mondello has highlighted a number of them, including:

(Apple has also updated the iOS Security Guide with a new section on user password management).

The company has patched a number of security holes with this update, including a code execution flaw in Bluetooth, a vulnerability that may allow an attacker in a privileged network position to spoof password prompts in the iTunes Store, a weakness in the RC4 cryptographic algorithm, and a logic issue that could allow a malicious website to exfiltrate autofilled data in Safari.

A vulnerability in iOS11 and later has also been addressed with a patch, as it allows an attacker in a privileged network position to intercept analytics data sent to Apple.

Many of the aforementioned vulnerabilities have also been fixed in tvOS 12 and watchOS 5.

The Safari 12 update includes fixes for three flaws: the autofilled data exfiltration issue mentioned above, a vulnerability that made it difficult for users to delete browsing history items, and a flaw that would allow a malicious website to spoof the user interface.

Mondello also pointed out that Safari 12 on macOS comes with improved Intelligent Tracking Prevention and a new Passwords pane in the browser’s Preferences, which shows users where they are reusing passwords. 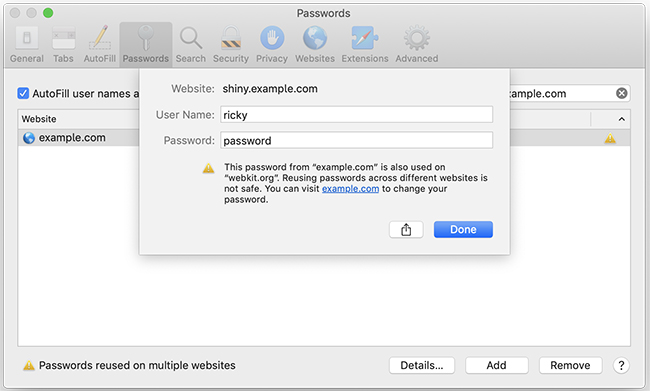