Nearly two-thirds of all advanced email attacks used emails impersonating Microsoft or Amazon, according to new research by Agari. 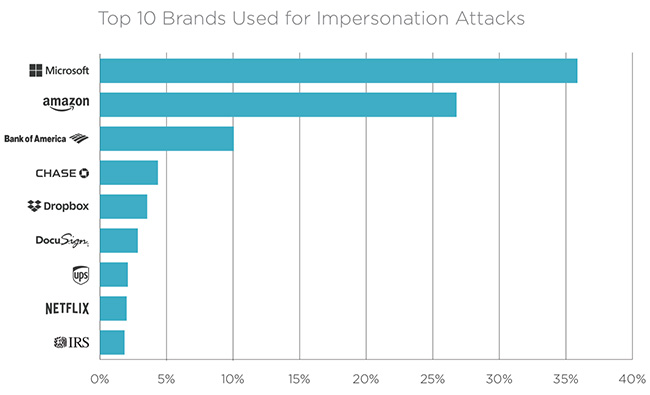 Microsoft was impersonated in 36 percent of all (brand) display name impersonation attacks in the third quarter. Amazon was the second most commonly impersonated company, used in 27 percent of these attacks. Amazon and Microsoft run the largest public cloud computing platforms, which are widely used by companies undergoing digital transformation projects.

The pattern was different for high-value targets, such as C-suite executives—Microsoft was impersonated in 71 percent of these attacks. Dropbox is a distant second at seven percent, followed by UPS at six percent.

These attacks often take the form of service updates, security alerts and password resets. The ubiquity of Microsoft Office in corporate environments and the rapid adoption of cloud-based Office 365 makes Microsoft an attractive impersonation target, while file-sharing services such as Dropbox are frequently imitated to distribute malware because users are more likely to trust its installation.

According to the FBI, business email compromise (BEC) has become a $12 billion scam. Advanced email attacks, such as BEC, leverage identity deception techniques, including domain name spoofing, look-alike domains and display name deception to take advantage of end-user trust. Legacy email security solutions, such as secure email gateways (SEGs), are unable to detect advanced email attacks because they do not include malicious URLs or malware attachments—the attacks Agari identified in its Q4 2018 report evaded detection by other email security solutions.

The intersection of display name deception and ATO attacks is revealed by the fact that Microsoft and Amazon are the most impersonated brands in digital deception-based attacks. The risk is that a successfully compromised Office 365 or AWS account may be used to launch subsequent attacks that are even harder to detect. 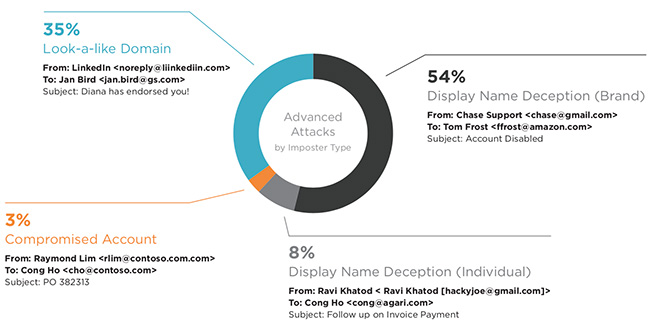 Email authentication adoption on the rise

This increased adoption coincided with the approaching (and now final) deadline for the Department of Homeland Security Binding Operational Directive (BOD) 18-01, which mandates all federal executive branch domains must adopt DMARC and implement a reject policy. The United States federal government now leads all industry verticals with an 84 percent DMARC adoption rate—more than three-quarters of federal domains (76 percent) have implemented a reject policy.