According to the IDC Worldwide Quarterly Enterprise Storage Systems Tracker, vendor revenue in the worldwide enterprise storage systems market increased 19.4% year over year to $14.0 billion during the third quarter of 2018 (3Q18). Total capacity shipments were up 57.3% year over year to 113.9 exabytes during the quarter.

Revenue generated by the group of original design manufacturers (ODMs) selling directly to hyperscale datacenters increased 45.8% year over year in 3Q18 to $3.9 billion. This represents 27.7% of total enterprise storage investments during the quarter.

Sales of server-based storage increased 10.1% year over year to $3.8 billion in revenue. This represents 27.3% of total enterprise storage investments. The external storage systems market was worth roughly $6.3 billion during the quarter, up 12.5% from 3Q17.

“The third quarter results show a continuation of growth realized through the first half of 2018, driven by an ongoing infrastructure refresh cycle, investments in resource intensive next-generation workloads, and expanded use in public cloud services,” said Sebastian Lagana, research manager, Infrastructure Platforms and Technologies. “Enterprises appreciate the value that data brings to their operations, client engagement, and innovation initiatives. As a result, there is ongoing investment in storage systems that support efficient data consumption and dissemination.”

Dell Inc. was the largest supplier for the quarter, accounting for 19.2% of total worldwide enterprise storage systems revenue and growing 21.8% year over year. HPE/New H3C Group was the second largest supplier with 16.4% share of revenue on a year-to-year decline of 3.3%. NetApp generated a 5.8% share of total revenue, making it the third largest vendor during the quarter. This represented 15.3% growth over 3Q17.

Hitachi, Huawei, IBM, Lenovo, and Inspur were all statistically tied for the number 4 position with shares of 3.0%, 3.0%, 2.9%, 2.6%, and 2.2% respectively. As a single group, storage systems sales by ODMs directly to hyperscale datacenter customers accounted for 27.7% of global spending during the quarter and grew revenue by 45.8% against 3Q17. 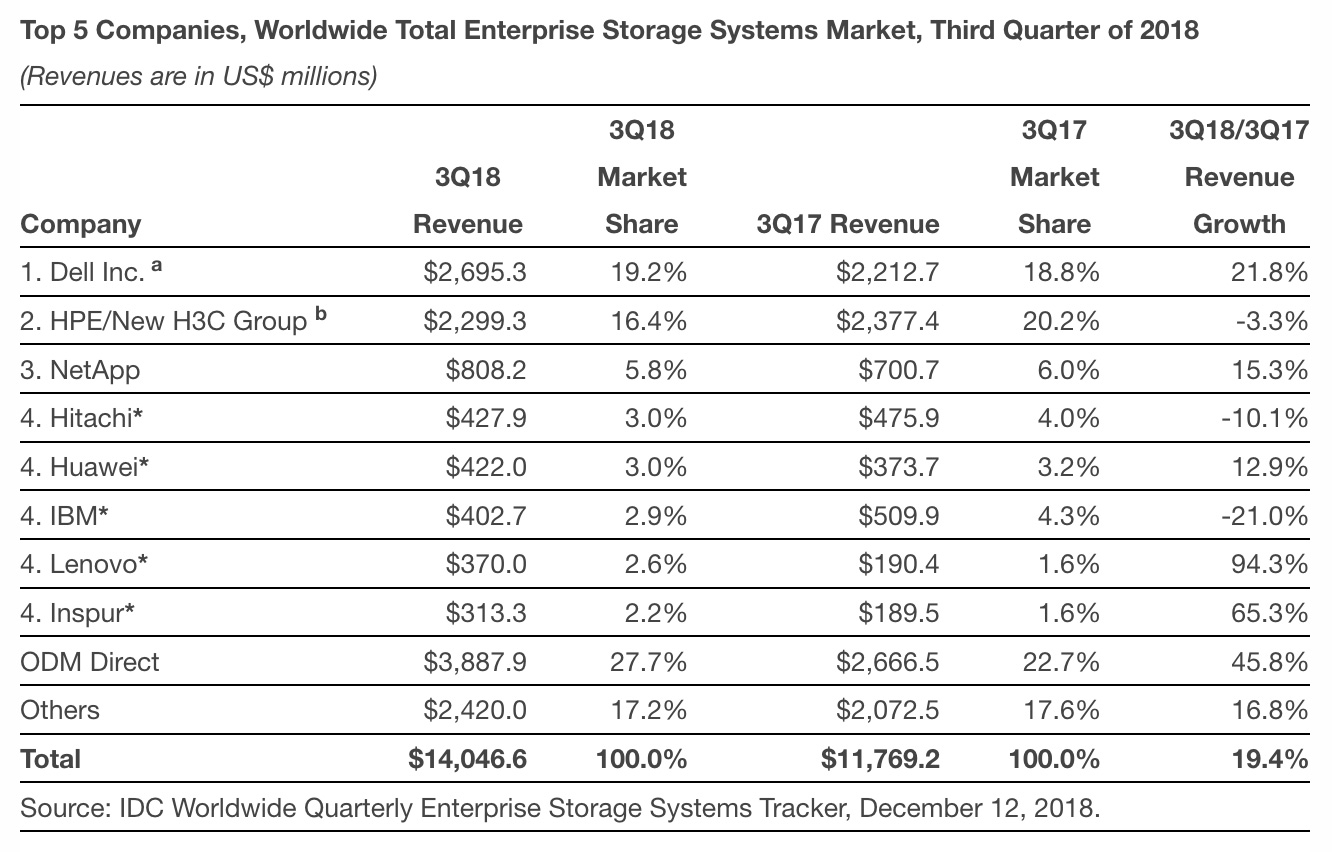 Dell Inc. was the largest external enterprise storage systems supplier during the quarter, accounting for 31.3% of worldwide revenues. NetApp finished in the number 2 position with 12.8% share of revenue during the quarter. HPE/New H3C Group was the third largest with 10.4% share of revenue. Hitachi and IBM rounded out the top 5 in a statistical tie* with 6.4% and 6.2% market share, respectively.