Cloud adoption is gaining momentum, as 36 percent of organizations are currently in the process of migrating to the cloud while close to 20 percent consider themselves to be in the advanced stages of implementation, according to the second annual cloud usage survey by data virtualization company Denodo. 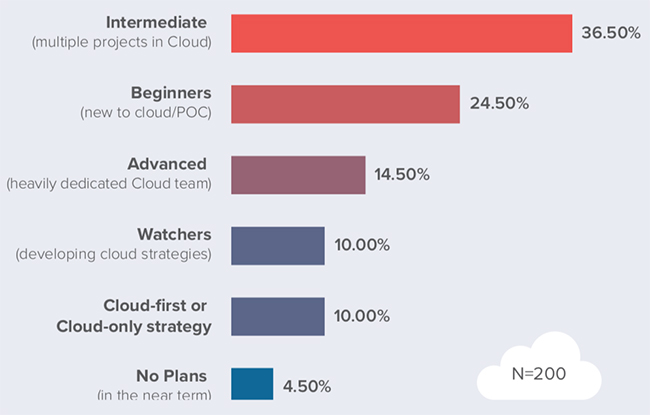 Due to the number of ways data is stored and the amount of time it takes to migrate these sources to the cloud, hybrid cloud is the most common and popular architecture (46 percent) followed by private cloud, multi-cloud and public cloud respectively.

Denodo has polled 200 business executives and IT professionals from a diverse group of technical backgrounds and discovered that organizations are adopting cloud computing in an effort to become more agile, lower IT costs, and have the ability to scale.

The top cloud providers for 2018 have maintained their positions: AWS is leading the pack (67 percent), followed by Microsoft Azure (60 percent) and Google Cloud (26 percent).

In terms of services offered, data warehouse modernization and data lakes are common migration use cases, as the center of data gravity slowly concentrates around the cloud.

While cloud adoption is on the rise, it’s not without its challenges as security remains the top concern (52 percent) followed by managing and tracking cloud spend (44 percent) and a lack of cloud skills (32 percent). Despite these concerns, 4 out of 10 respondents said they would re-factor or re-architect their applications to take advantage of cloud computing.

67.2% of the respondents (i.e., their organizations) store sensitive data in the public cloud.

“Data security and protection is among the biggest concerns in cloud computing. When confidential information is hosted by cloud service providers, a considerable amount of the end user’s security and privacy control is transferred to the cloud vendor. Various factors such as operational security, business continuity, disaster recovery, shared access, data ownership, and lack of standardization come into play,” the company noted.

Containers are gaining in importance, with Docker containers being the most used (31 percent) followed by Kubernetes (21 percent).

Finally, interest in cloud marketplaces continued to grow as nearly three out of five (59 percent) expressed interest in these pay-as-you-go subscription models, followed by their ability to support self-serviceability (48 percent) and a lower cost of entry (40 percent).