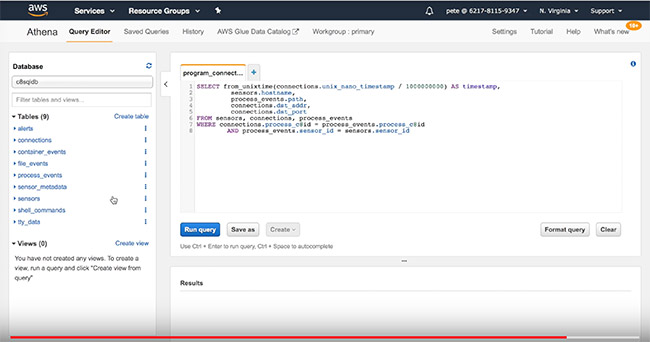 An industry-first cloud investigation capability, Capsule8’s Investigations is designed to remove the manual effort required to maintain a dedicated database just for security data – enabling customers to quickly determine what transpired in an incident (who, what, when, where).

By leveraging cloud native technologies, including AWS Athena and Google’s BigQuery, organizations can create an on-demand database and make that data accessible for security practitioners seeking additional context about alerts and system activities.

This also creates a feedback loop for security teams to investigate an incident, figure out why it happened, and refine automated response actions to prevent it in the future. Importantly, Investigations reimagines security as a data warehousing problem and enables cloud users to receive the benefit of a scalable data pipeline with minimal setup and maintenance.

Capsule8 Protect is the industry’s only high-performance, real-time attack protection platform purpose-built for Linux production environments – whether containerized, virtualized or bare metal. The platform monitors a customer’s entire Linux infrastructure, detecting and preventing attacks and other unwanted activity to keep the production environment safe and stable – in the cloud, containers or on-prem alike. Capsule8 helps companies of any size collect and understand all the data needed to protect themselves, without having to reinvent the wheel with costly manual effort.

The new Investigations capability enables Capsule8 Protect Sensors to ship investigations event data as Apache Parquet to Amazon S3 Buckets or Google Cloud Storage. From there, the data can be used effectively by Amazon’s Athena or Google’s BigQuery where it can be accessed by security practitioners more quickly and efficiently. Using data from Capsule8 Protect’s Sensors, customers can easily conduct investigations on activity data ranging from network connections to process activity and everything in between.

Doing so enables organizations to determine exactly what happened in an incident and trace the actions taken by all users involved, at scale. Armed with this information, companies can adopt a more proactive approach to prevention while increasing incident response productivity.

“Nobody wants to take on the cost or burden of maintaining a database until they absolutely need one,” said John Viega, co-founder and CEO of Capsule8. “Even if the need is there, sometimes the resources are not. We wanted to bring the benefits of data warehousing to security in a way that is simple, inexpensive, and scalable. With Capsule8, customers in the cloud now have a way to take advantage of all of these big warehouses that security companies previously haven’t touched and get real insights into what has happened within their production environments to help prevent future incidents or alerts.”