Google and its subsidiary YouTube will pay a record $170 million to settle allegations by the Federal Trade Commission (FTC) and the New York Attorney General that the YouTube video sharing service illegally collected personal information from children without their parents’ consent. 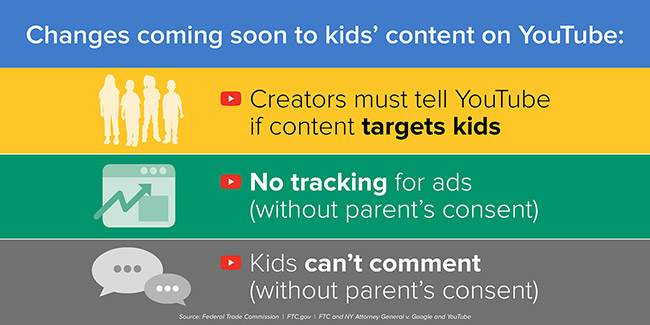 The settlement requires them to pay $136 million to the FTC and $34 million to New York for allegedly violating the Children’s Online Privacy Protection Act (COPPA) Rule. The $136 million penalty is by far the largest amount the FTC has ever obtained in a COPPA case since Congress enacted the law in 1998.

The COPPA Rule requires that child-directed websites and online services provide notice of their information practices and obtain parental consent prior to collecting personal information from children under 13, including the use of persistent identifiers to track a user’s Internet browsing habits for targeted advertising. In addition, third parties, such as advertising networks, are also subject to COPPA where they have actual knowledge they are collecting personal information directly from users of child-directed websites and online services.

In a complaint filed against the companies, the FTC and New York Attorney General allege that YouTube violated the COPPA Rule by collecting personal information — in the form of persistent identifiers that are used to track users across the Internet — from viewers of child-directed channels, without first notifying parents and getting their consent. YouTube earned millions of dollars by using the identifiers, commonly known as cookies, to deliver targeted ads to viewers of these channels.

“YouTube touted its popularity with children to prospective corporate clients,” said FTC Chairman Joe Simons. “Yet when it came to complying with COPPA, the company refused to acknowledge that portions of its platform were clearly directed to kids. There’s no excuse for YouTube’s violations of the law.”

The FTC and New York Attorney General allege that:

In addition, according to the complaint, YouTube manually reviewed children’s content from its YouTube platform to feature in its YouTube Kids app. Despite this knowledge of channels directed to children on the YouTube platform, YouTube served targeted advertisements on these channels. According to the complaint, it even told one advertising company that it did not have users younger than 13 on its platform and therefore channels on its platform did not need to comply with COPPA.

In addition to the monetary penalty, the proposed settlement requires Google and YouTube to:

The settlement also prohibits Google and YouTube from violating the COPPA Rule, and requires them to provide notice about their data collection practices and obtain verifiable parental consent before collecting personal information from children.

The FTC also noted that creators that fail to properly identify child-directed content as such could be penalized by getting removed from the YouTube platform and also be subjected to additional civil penalties.