Cybercriminals upped the intensity of IoT and SMB-related attacks in the first half of 2019, according to a new F-Secure report. 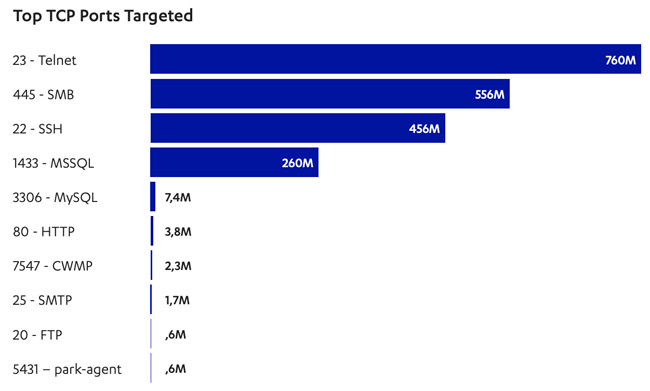 The report underscores the threats IoT devices face if not properly secured when online, as well as the continued popularity of Eternal Blue and related exploits two years after WannaCry.

F-Secure’s honeypots – decoy servers that are set up to lure in attackers for the purpose of collecting information – measured a twelvefold increase in such events compared to the same period a year ago.

The increase was driven by traffic targeting the Telnet and UPnP protocols, which are used by IoT devices, as well as the SMB protocol, which is used by the Eternal family of exploits to propagate ransomware and banking Trojans.

Telnet traffic accounted for the largest share of traffic for the period, with over 760 million attack events logged, or around 26 percent of traffic. UPnP was the next most frequent, with 611 million attacks. SSH, which is also used to target IoT devices, had 456 million attacks.

Likely sources of this traffic are IoT devices infected with malware such as Mirai, which was also the most common malware family seen by the honeypots. Mirai infects routers, security cameras, and other IoT devices that use factory default credentials.

Traffic to SMB port 445 accounted for 556 million attacks. The high level of SMB traffic is an indication that the Eternal family of exploits, the first of which was used in the devastating WannaCry ransomware outbreak of 2017, is still alive and well, trying to ravage millions of still-unpatched machines.

“Three years after Mirai first appeared, and two years after WannaCry, it shows that we still haven’t solved the problems leveraged in those outbreaks,” said F-Secure Principal Researcher Jarno Niemela.

“The insecurity of the IoT, for one, is only getting more profound, with more and more devices cropping up all the time and then being co-opted into botnets. And the activity on SMB indicates there are still too many machines out there that remain unpatched.”

Other findings from the report include: