Security researchers have discovered a cryptojacking worm that propagates using containers in the Docker Engine (Community Edition) and has spread to more than 2,000 vulnerable Docker hosts. 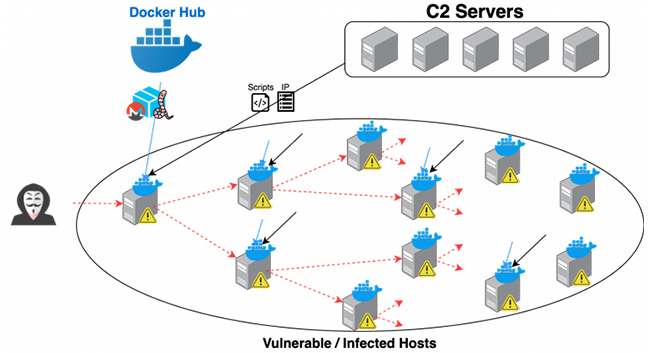 “The attacker compromised an unsecured Docker daemon, ran the malicious Docker container pulled from Docker Hub, downloaded a few scripts and a list of vulnerable hosts from C2 and repeatedly picked the next target to spread the worm,” Palo Alto Networks’s Unit 42 researchers explained.

Dubbed Graboid by the researchers, the worm carries out cryptojacking inside containers, spreads a few host at a time, and mines Monero in short bursts.

The reason for this randomized behavior is unknown, but it definitely failed at keeping the cryptojacking unnoticed.

The worm works with a list of 2,034 vulnerable Docker hosts. Some of those have been compromised to also serve as command and control servers from which the malware downloads the shell scripts responsible for:

The two malicious Docker images have been downloaded more than 16,500 times, but have since been removed from Docker Hub, along with another cryptojacking image by the same user.

The researchers estimated that the malicious actor behind this scheme “owns” a 1,400 node mining cluster that has at least 900 CPU mining power.

Things could be worse for the rightful owners of the compromised hosts, though.

“While this cryptojacking worm doesn’t involve sophisticated tactics, techniques, or procedures, the worm can periodically pull new scripts from the C2s, so it can easily repurpose itself to ransomware or any malware to fully compromise the hosts down the line and shouldn’t be ignored. If a more potent worm is ever created to take a similar infiltration approach, it could cause much greater damage, so it’s imperative for organizations to safeguard their Docker hosts,” they noted.

This means that they have secure Docker daemons exposed to the internet, use secure means of connecting to them, use firewall rules to whitelist incoming traffic to a small set of sources, and consider deploying a security solution that can identify malicious containers.

Another piece of advice is to avoid pulling Docker images from unknown registries or unknown user namespaces. Every so often malicious packages find their way to online repositories/registries, and Docker Hub – the default registry where Docker looks for images – is no exception.