A protocol that significantly extends the distance a Wi-Fi-enabled device can send and receive signals has been created by a group of researchers led by a Brigham Young University computer engineering professor. 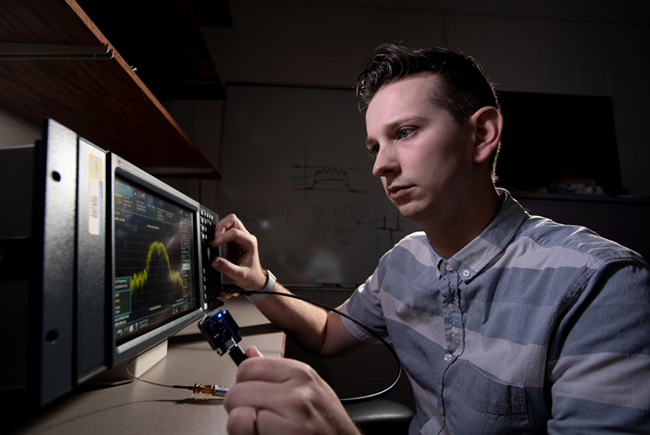 The engineering innovation requires no new hardware to enhance the signal range for IoT devices, like a door sensor or motion detector, but can extend the distance these devices can be installed from a Wi-Fi access point by more than 60 meters, according to test results.

“That’s the really cool thing about this technology: it’s all done in software,” said Phil Lundrigan, assistant professor of computer engineering at BYU. “In theory, we could install this on almost any Wi-Fi-enabled device with a simple software update.”

The new protocol is called On-Off Noise Power Communication and is programmed right on top of the existing Wi-Fi protocol using the same hardware.

To do so, Lundrigan, Neal Patwari of Washington University (in St. Louis) and Sneha Kasera of the University of Utah adjusted the transmitter in a Wi-Fi-enabled device to send wireless noise in addition to data. They programmed into the Wi-Fi sensor a series of 1s and 0s, essentially turning the signal on and off in a specific pattern.

The Wi-Fi router was able to distinguish this pattern from the surrounding wireless noise (from computers, televisions and cell phones) and therefore know that the sensor was still transmitting something, even if the data wasn’t being received.

“If the access point (router) hears this code, it says, ‘OK, I know the sensor is still alive and trying to reach me, it’s just out of range,'” Patwari said. “It’s basically sending one bit of information that says it’s alive.”

But according to Lundrigran, one bit of information is sufficient for many Wi-Fi enabled devices that simply need an on/off message, such as a garage door sensor, an air quality monitor or even a sprinkler system.

During their research, the authors successfully implemented their ONPC protocol, along with a cleverly named application to manage the protocol (“Stayin’ Alive”), ultimately extending the range of an off-the-shelf device 67 meters beyond the range of standard Wi-Fi.

The researchers made clear to point out that their ONPC protocol is not meant to replace Wi-Fi or even long-range wireless protocols like LoRa, but is meant to supplement Wi-Fi. Specifically, only when Stayin’ Alive detects that the Wi-Fi device has lost its connection, it starts transmitting data using ONPC.

That being said, authors believe the innovation could make LoRa even longer range or be used on top of other wireless technologies.

“We can send and receive data regardless of what Wi-Fi is doing; all we need is the ability to transmit energy and then receive noise measurements,” Lundrigan said. “We could apply this to cellular or Bluetooth as well.