Most U.S. adults say that the potential risks they face because of data collection by companies (81%) and the government (66%) outweigh the benefits, but most (>80%) feel that they have little or no control over how these entities use their personal information, a recent Pew Research Center study on USA digital privacy attitudes has revealed.

The study has also shown that: 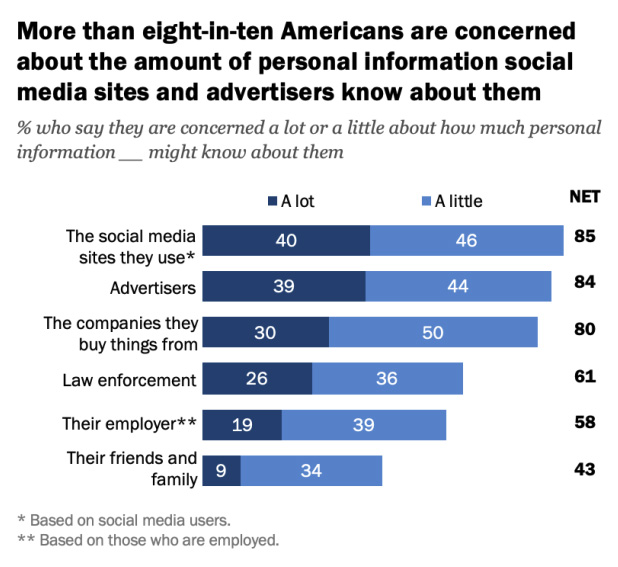 It’s also interesting to note that nearly half of respondents are ok with the government collecting data about all Americans to assess potential terrorist threats, improve educational outcomes and being able to get access to Americans’ DNA data to help solve crimes, but three out of four respondents don’t want social media companies to monitor users’ post for signs of depression (to connect them with mental health professionals) or smart speaker makers to share users’ audio recordings with law enforcement to help with criminal investigations.

Are we approaching a tipping point?

Are Americans ready to tackle the digital privacy issues they obviously see and are concerned about?

While some U.S. lawmakers are trying to push through legislation that should improve Americans’ online and offline privacy prospects (and some have succeeded), most are having trouble understanding the potential negative consequences of different technologies and/or are unwilling to put a stop to some practices lest they be labeled anti-business.

In the meantime, American consumers have little effective power to do something about the data collection.

But perhaps the time has come to, as they say, vote with their wallets? There is a variety of secure, private services out there and more cropping up every week.

Some are paid (e.g., new social platform Neone), some rely on donations (e.g., Wikipedia co-founder Jimmy Wales’ news focused social network WT:Social), but promise no advertising, no data tracking, no data selling, more effective content serving, the possibility to do something about the propagation of fake news, etc.