With 5G adoption ramping up all over the world, we sat down with Chris Pearson, President of 5G Americas, to learn more about the current 5G landscape.

What’s your take on the current global progress towards 5G?

Despite the COVID-19 crisis, 5G continues to progress at a robust pace in terms of deployments and subscribers and I am optimistic this will continue throughout 2020. I feel great about the progress and situationally, network operators are quickly moving ahead with 5G network deployments. We expect to see the start of transitions toward 5G stand-alone networks during the latter half of 2020 and into 2021.

The pandemic has slowed some work on 5G standards for 3GPP Releases 16 and 17 by around three months so far, but this has not delayed operator progress in most parts of the world. From a supply chain standpoint, I see just a small bit of concern regarding some equipment delivery delays by equipment vendors but for the most part 5G is moving along well.

All told, 5G is currently the fastest growing generation of wireless cellular technology, with the quickest time to reach the current number of subscribers. There are currently 74 5G commercial deployments globally and that number is expected to increase to 200 by the end of the year.

Worldwide, 5G subscriptions are currently at 90 million as of Q1 2020 and that is expected to grow to over 258 million connections by the end of 2020.

Is security taken into consideration from the start?

Yes, security was always a consideration for the start for 5G as the technology addresses new use cases. In fact, security in mobile wireless cellular communications has always been critically important and that commitment carries through into 5G.

For instance, 3GPP, an international organization that sets 5G standards, has created new 5G security protocols that include enhancements for encryption, mutual authentication, integrity protection, privacy and availability. These enhancements make improvements throughout the network, targeting the user plane, control plane and management traffic with a variety of improvements.

Where do you see the most significant 5G investments being made? When can we expect for 5G to become truly mainstream?

The largest investments and commitments to 5G are being made in the United States and also the Asia-Pacific region. Wireless operators in the U.S., China, Japan and Korea are deploying 5G technology at a rapid pace for their customers.

From an investment standpoint, most operators are investing in deploying 5G and various low, mid and high spectrum bands. Thus, primary investment is targeted at 5G Radio Access Networks infrastructure. Within 5G networks, we see strong continued investment across a variety of areas such as 5G RAN, 5G Core Network), increased virtualization and cloudification of network cores, and mobile edge networks.

5G becomes very mainstream in many parts of the world in 2021. 5G is already a commercial reality with growing coverage and from an adoption standpoint and it will continue to grow toward mainstream as deployments increase and 5G devices become mass market. 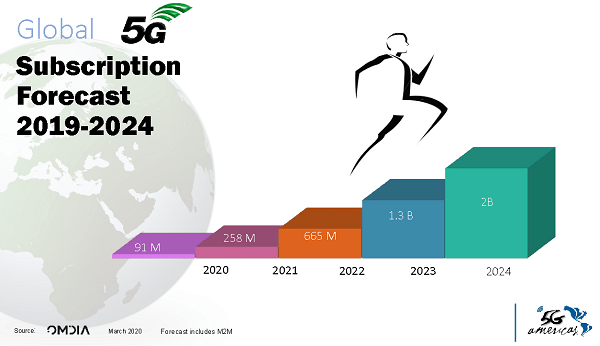 Looking at initial launches, what do you see as the biggest 5G network deployment challenges?

While the US has been a leader in allocating mmWave high band spectrum, we should harmonize our spectrum bands with other nations that lead in 5G who have made mid-band spectrum available for their citizens. In terms of network density, the U.S. needs more streamlined cell siting processes across federal, state, and local jurisdictions in order to more quickly ramp up cell sites.

5G is going to bring a surge in traffic, with mission-critical use cases dominating at first. What are the most significant reliability and security concerns?

5G was created and standardized with a network architecture to address three families of use cases including enhanced mobile broadband, massive machine to machine communications and ultra-reliable and low latency critical communications. 5G is built right from the ground up with a great security foundation, including improvements such as a Unified Authentication framework, User privacy protection, Secure Service-Based Architecture and improved rogue base station detection and mitigation to name a few.

There are several areas relating to security that impact 5G wireless networks:

1. 5G wireless technology significantly differs from previous wireless generations, creating novel avenues of attack, as the entire network is being re-architected to use software-defined networking and service-based architecture, including network slicing.

2. 5G non-standalone networks operate 5G radio access networks (RANs) and 4G LTE or LTE Advanced “Evolved Packet Cores” (EPC), so LTE threats and vulnerabilities will still exist in 5G NSA networks. These attacks can include, but are not limited to:

Security and reliability are important elements of the success of the technology, and the challenge is understanding the surface area for threats grows as networks increase in complexity. However, I am extremely optimistic the technology is ready for the challenge.