Now that so many of us are covering our faces to help reduce the spread of COVID-19, how well do face recognition algorithms identify people wearing masks? The answer, according to a preliminary study by the National Institute of Standards and Technology (NIST), is with great difficulty. 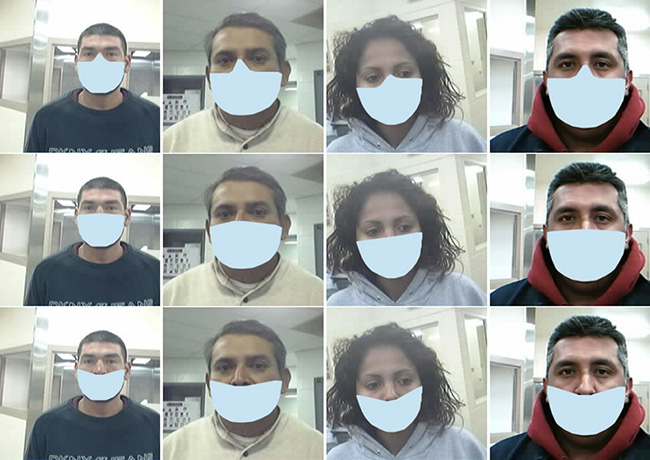 Even the best of the 89 commercial facial recognition algorithms tested had error rates between 5% and 50% in matching digitally applied face masks with photos of the same person without a mask.

The results were published as a NIST Interagency Report (NISTIR 8311), the first in a planned series from NIST’s Face Recognition Vendor Test (FRVT) program on the performance of face recognition algorithms on faces partially covered by protective masks.

“With the arrival of the pandemic, we need to understand how face recognition technology deals with masked faces,” said Mei Ngan, a NIST computer scientist and an author of the report. “We have begun by focusing on how an algorithm developed before the pandemic might be affected by subjects wearing face masks. Later this summer, we plan to test the accuracy of algorithms that were intentionally developed with masked faces in mind.”

The NIST team explored how well each of the algorithms was able to perform “one-to-one” matching, where a photo is compared with a different photo of the same person. The function is commonly used for verification such as unlocking a smartphone or checking a passport. The team tested the algorithms on a set of about 6 million photos used in previous FRVT studies. (The team did not test the algorithms’ ability to perform “one-to-many” matching, used to determine whether a person in a photo matches any in a database of known images).

The research team digitally applied mask shapes to the original photos and tested the algorithms’ performance. Because real-world masks differ, the team came up with nine mask variants, which included differences in shape, color and nose coverage. The digital masks were black or a light blue that is approximately the same color as a blue surgical mask.

The shapes included round masks that cover the nose and mouth and a larger type as wide as the wearer’s face. These wider masks had high, medium and low variants that covered the nose to different degrees. The team then compared the results to the performance of the algorithms on unmasked faces.

“We can draw a few broad conclusions from the results, but there are caveats,” Ngan said. “None of these algorithms were designed to handle face masks, and the masks we used are digital creations, not the real thing.”

Comparing the performance of the tested algorithms

If these limitations are kept firmly in mind, Ngan said, the study provides a few general lessons when comparing the performance of the tested algorithms on masked faces versus unmasked ones.

Algorithm accuracy with masked faces declined substantially across the board. Using unmasked images, the most accurate algorithms fail to authenticate a person about 0.3% of the time. Masked images raised even these top algorithms’ failure rate to about 5%, while many otherwise competent algorithms failed between 20% to 50% of the time.

Masked images more frequently caused algorithms to be unable to process a face, technically termed “failure to enroll or template” (FTE). Face recognition algorithms typically work by measuring a face’s features — their size and distance from one another, for example — and then comparing these measurements to those from another photo. An FTE means the algorithm could not extract a face’s features well enough to make an effective comparison in the first place.

The more of the nose a mask covers, the lower the algorithm’s accuracy. The study explored three levels of nose coverage — low, medium and high — finding that accuracy degrades with greater nose coverage.

The shape and color of a mask matters. Algorithm error rates were generally lower with round masks. Black masks also degraded algorithm performance in comparison to surgical blue ones, though because of time and resource constraints the team was not able to test the effect of color completely.