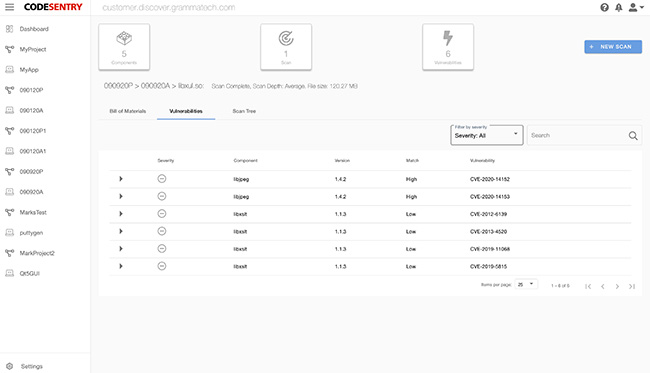 “Using third party components rather than building applications from scratch is an accepted practice for accelerating time to market and is fueling a massive growth in reusable code,” said Mike Dager CEO of GrammaTech.

“Most organizations now recognize the security risks that third-party code poses to their applications and business, and the need for software composition analysis provided by CodeSentry, which inspects binaries for unmatched precision.”

High profile attacks exploiting open source vulnerabilities have magnified the need for scrutiny of third-party code. According to Gartner, “Software supply chain risk has gained increased attention. In contrast with vulnerabilities — which are accidental — a growing number of incidents have been observed in which malicious code has intentionally been introduced by attackers looking to exploit the trust that exists in the open-source community.”

Since third party software can be delivered in source or binary form, its underlying components may be unknown to the organization using it. This code can be open source, commercial off the shelf (COTS) or contracted software.

CodeSentry can detect the components and vulnerabilities associated with them, including network components, GUI components or authentication layers. It uses deep binary analysis to create a detailed software bill of materials (SBOM) and a comprehensive list of known vulnerabilities.

“Customers using first generation software composition analysis tools that rely on source code to identify third party components are often at a disadvantage as they do not have visibility into software that is delivered as binaries,” said Vince Arneja, Chief Product Officer for GrammaTech.

“GrammaTech’s ability to provide binary analysis and create a software bill of materials eliminates this dangerous blind spot so organizations can proactively shrink their attack surface.”

CodeSentry, which is based on GrammaTech’s groundbreaking binary code analysis and machine learning technology, delivers deep visibility without the need for source code as well as these key benefits: