Federal IT leaders across the country voiced the importance of network visibility in managing and securing their agencies’ increasingly complex and hybrid networks, according to Riverbed. 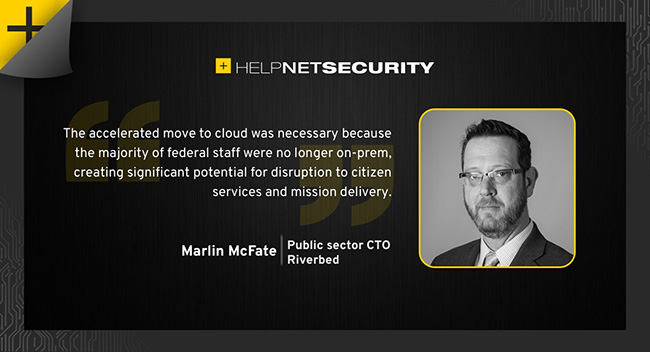 Of 200 participating federal government IT decision makers and influencers, 90 percent consider their networks to be moderately-to-highly complex, and 32 percent say that increasing network complexity is the greatest challenge an IT professional without visibility faces in their agency when managing the network.

Driving this network complexity are Cloud First and Cloud Smart initiatives that make it an imperative for federal IT to modernize its infrastructure with cloud transformation and “as-a-service” adoption.

More than 25 percent of respondents are still in the planning stages of their priority modernization projects, though 87 percent of survey respondents recognize that network visibility is a strong or moderate enabler of cloud infrastructure.

Network visibility can help expedite the evaluation process to determine what goes onto an agency’s cloud and what data and apps stay on-prem; it also allows clearer, ongoing management across the networks to enable smooth transitions to cloud, multi-cloud and hybrid infrastructures.

The COVID-19 has further accelerated modernization and cloud adoption to support the massive shift of the federal workforce to telework – a recent Market Connections study indicates that 90 percent of federal employees are currently teleworking and that 86 percent expect to continue to do so at least part-time after the pandemic ends.

The rapid adoption of cloud-based services and solutions and an explosion of new endpoints accessing agency networks during the pandemic generated an even greater need for visibility into the who, what, when and where of traffic. In fact, 81 percent of survey respondents noted that the increasing use of telework accelerated their agency’s use and deployment of network visibility solutions, with 25 percent responding “greatly.”

“The accelerated move to cloud was necessary because the majority of federal staff were no longer on-prem, creating significant potential for disruption to citizen services and mission delivery,” said Marlin McFate, public sector CTO at Riverbed.

“This basically took IT teams from being able to see, to being blind. All of their users were now outside of their protected environments, and they no longer had control over the internet connections, the networks employees were logging on from or who or what else had access to those networks. To be able to securely maintain networks and manage end-user experience, you have to have greater visibility.”

Lack of visibility into agency networks and the proliferation of apps and endpoints designed to improve productivity and collaboration expands the potential attack surface for cyberthreats.

Further, respondents ranked cybersecurity as their agency’s number one priority that can be improved through better network visibility, and automated threat detection was identified as the most important feature of a network visibility solution (24 percent), followed by advanced reporting features (14 percent), and automated alerting (13 percent).

“Network visibility is the foundation of cybersecurity and federal agencies have to know what’s on their network so they can rapidly detect and remediate malicious actors. And while automation enablement calls for an upfront time investment, it can significantly improve response time not only for cyber threat detection but also network issues that can hit employee productivity,” concluded McFate.