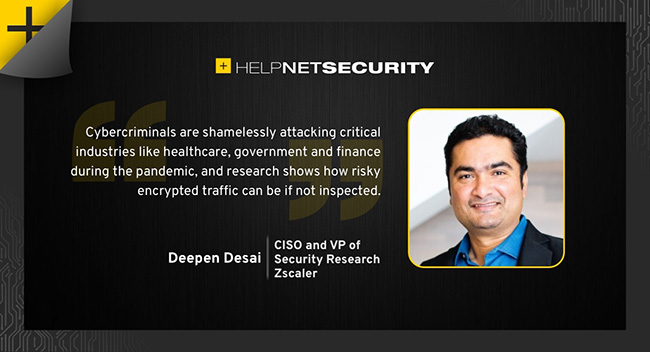 Showing that cybercriminals will not be dissuaded by a global health crisis, they targeted the healthcare industry the most. Following healthcare, the research revealed the top industries under attack by SSL-based threats were:

COVID-19 is driving a ransomware surge

Researchers witnessed a 5x increase in ransomware attacks over encrypted traffic beginning in March, when the World Health Organization declared the virus a pandemic. Earlier research from Zscaler indicated a 30,000 percent spike in COVID-related threats, when cybercriminals first began preying on fears of the virus.

As one of the most commonly used attacks over SSL, phishing attempts reached more than 193 million instances during the first nine months of 2020. The manufacturing sector was the most targeted (38.6 percent) followed by services (13.8 percent), and healthcare (10.9 percent).

Cybercriminals continue to become more sophisticated in avoiding detection, taking advantage of the reputations of trusted cloud providers such as Dropbox, Google, Microsoft, and Amazon to deliver malware over encrypted channels.

Since Microsoft technology is among the most adopted in the world, Zscaler identified Microsoft as the most frequently spoofed brand for phishing attacks, which is consistent with ThreatLabZ 2019 report. Other popular brands for spoofing included PayPal and Google. Cybercriminals are also increasingly spoofing Netflix and other streaming entertainment services during the pandemic.

“Cybercriminals are shamelessly attacking critical industries like healthcare, government and finance during the pandemic, and this research shows how risky encrypted traffic can be if not inspected,” said Deepen Desai, CISO and VP of Security Research at Zscaler. “Attackers have significantly advanced the methods they use to deliver ransomware, for example, inside of an organization utilizing encrypted traffic. The report shows a 500 percent increase in ransomware attacks over SSL, and this is just one example to why SSL inspection is so important to an organization’s defense.”