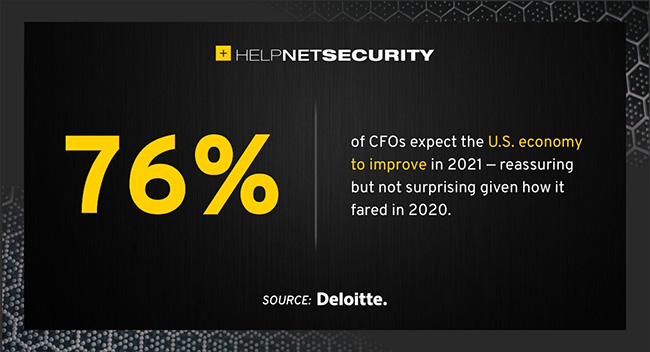 This quarter, just 18% of CFOs rate the North American economy as good, but 59% expect better conditions in a year. Europe was flat at 5% and 37%, respectively, and China improved markedly to 47% and 60%. On a positive note, 76% of CFOs expect the U.S. economy to improve in 2021 — reassuring but not surprising given how it fared in 2020.

Nearly 70% expect a vaccine to bolster the economy by mid-year. However, only 19% expect the economy to grow faster over the next five years than pre-pandemic — when the economy was slowing.

CFOs indicate a bias toward a smaller, targeted stimulus package over a large, comprehensive package like the CARES Act. They are largely mixed on whether higher corporate tax rates would reduce their capital spending and on whether tax incentives would influence their onshoring/offshoring decisions.

When it comes to trade, most CFOs say the protectionist policy is not beneficial for their companies, and most prefer de-escalation of U.S.-China trade tensions.

More than one-third, however, say confronting China on their trade practices would be good for their company. CFOs overwhelmingly say the federal government should lead strategy and investment in response to COVID-19.

Finishing out a difficult 2020, just over 40% of CFOs expect to achieve 95% or more of their originally budgeted 2020 revenue, with the average expecting 88% (retail/wholesale is lowest at 69%).

Consistent with their near-term COVID-19 worries and hopes for a broadly available vaccine later next year, nearly two-thirds do not expect pre-crisis operating levels until at least the second half of 2021, and 26% do not expect to get there until 1Q22 or later (especially in retail/wholesale, manufacturing, and services).

“CFOs have been critical to helping their companies reformulate and adapt their plans throughout nine of the toughest months in recent history—and the process continues.

“Nearly two-thirds of CFOs say they do not expect to return to pre-crisis operating levels until the second half of 2021 or later, and 26% do not expect to get there until 1Q22 or later,” said Steve Gallucci, national managing partner, U.S. chief financial officer program, Deloitte.

CFOs mostly expect the federal funds rates to stay low (but are split) and expect bond yields below 2%. They expect the renminbi to gain on the US dollar and for its use as a trading currency to rise substantially; expectations for the euro and digital currencies rose as well.

Hopes for Washington over the next four years

CFOs’ hopes for Washington center largely on cooperating to get important things done and unifying the country with moderation, transparency and decency. CFOs voiced very strong hopes for improvement in Washington’s accomplishments and tone.

Nearly two-thirds mentioned hopes related to bipartisanship, cooperation and compromise — with a heavy focus on the desire to get important things done for the good of the country and economy.

More than half expressed hopes for strong leadership and unification, with less divisiveness, more transparency and stability, more civility and more moderation. They also mentioned desires for better policy consistency and clarity — especially around international relations and trade policy.