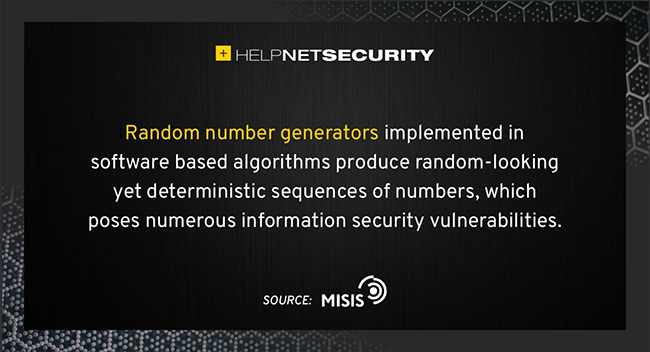 The device created by scientists from NUST MISIS, Russian Quantum Center, University of Oxford, Goldsmiths, University of London and Freie Universität Berlin produces randomness at a rate of 8.05 gigabits per second, which makes it the fastest random number generator of its kind.

The study is a promising starting point for the development of commercial random number generators for cryptography and complex systems modeling.

Random number generation (RNG) is used in encryption with a multitude of applications, including cryptography, numerical simulation, gambling and game development. Random numbers are at the core of strong, unique encryption keys used to protect cryptographic operations from being breached. RNG can also enhance the performance of AI-powered systems.

In search for true randomness scientists have turned to quantum mechanics. Since randomness is a fundamental property of quantum processes, quantum events can be harnessed to generate truly random numbers.

In their experiments, the researchers used the inherently unpredictable behavior of photons to generate randomness. They created an optical generator with a built-in certification protocol to ensure the random nature of the number generation process.

In their experiments, the researchers sent light from the “untrusted” light source into one input of a beam splitter while the other input was the vacuum. The consequent pair of output beams was then measured using two separate optical detectors.

Since each photon that hits the beam splitter has an equal chance of being reflected or transmitted, the difference between the numbers of photons recorded by each detector is impossible to predict. It is a truly random number.

Confirming the randomness is reliable

To confirm that randomness generated by the device was reliable, the researchers performed another measurement to make sure that the light signal contains a sufficient number of photons.

If the number of photons is insufficient, the number of possible unpredictable events will be too low for the obtained randomness to be confirmed true. If the photon input is too high, both detectors will hit their maximum value, resulting in the measurement being fully predictable.

The new RNG generates random numbers at a rate of 8.05 gigabits per second – which makes it the fastest composably secure quantum random number generator ever reported- and provides real-time randomness certification. According to the researchers, the device is significantly faster that the previously existing prototypes.

The inclusion of the real-time randomness certification and the use of off-the-shelf components to build the generator makes this technology applicable to commercial RNGs that have rather broad applications. This level of practicality, combined with high performance speed and reliability makes it suitable for use in cryptography, computer studies, statistics, scientific research etc.