VMware released a report based on an online survey of 3,542 CIOs, CTOs and CISOs in December 2020 from across the globe. The report explores the impact of cyberattacks and breaches on organizations and details how security teams are adapting to these challenges. 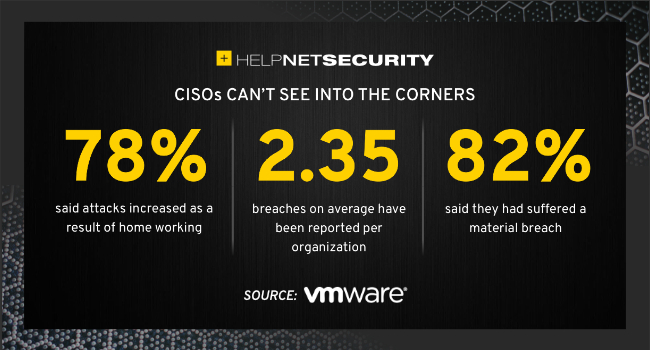 Close to 80 percent of organizations surveyed experienced cyberattacks due to more employees working from home, highlighting the vulnerabilities in legacy security technology and postures.

“The race to adopt cloud technology over the past year has created a once-in-a-generation chance for business leaders to rethink their approach to cybersecurity,” said Rick McElroy, Principal Cybersecurity Strategist, VMware.

“Legacy security systems are no longer sufficient, organizations need protection that extends beyond endpoints to workloads to better secure data and applications. As attacker sophistication and security threats become more prevalent than ever, it’s time to empower defenders to detect and stop attacks and implement security stacks built for a cloud-first world.”

A lack of urgency despite surge in material breaches

81% of respondents have suffered a breach in the last twelve months with 4 out of 5 breaches (82%) considered material. Yet, security professionals have underestimated the likelihood of a material breach.

Only 56% say they fear a material breach in the next year, and just 41% have updated their security policy and approach to mitigate the risk.

76% of respondents said attack volumes had increased – with majority pointing to employees working from home as the cause – and 79% said attacks had become more sophisticated.

Cloud-based attacks were the most frequently experienced attack type in the past year, whereas the leading breach causes were third-party apps (14%) and ransomware (14%).

98% of respondents already use or plan to use a cloud-first security strategy. But the move to cloud has expanded the threat surface. 61% agree they need to view security differently now that the attack surface has expanded.

43% of respondents said they plan to build more security into their infrastructure and apps and reduce the number of point solutions.

Applications and workloads are viewed as the most vulnerable points on the data journey by CxOs. 63% agree they need better visibility over data and apps in order to pre-empt attacks.

60% of respondents also shared that their senior leadership team feel increasingly worried about bringing new applications to market because of the growing threat and damage of cyberattacks.

Security concerns are holding back adoption of AI

The next frontier for business innovation may be artificial intelligence, but 56% of CxOs say that security concerns are holding them back from embracing AI and machine learning.

The pandemic and shift to anywhere work have undoubtedly changed the threat landscape requiring security teams to transform their cybersecurity strategies and stay one step ahead of attackers. Key focus areas for the coming year must include improving visibility into all endpoints and workloads, responding to the resurgence of ransomware, delivering security as a distributed service, and adopting an intrinsic approach to cloud-first security.