For SAP’s estimated 35,000 ERP customers worldwide, it’s not a question of whether they will migrate to S/4HANA – but when and how. A recent study by LeanIX shows that most companies are only in the early stages of this massive transformation project. 80 percent of architects surveyed said identifying dependencies of the complex ERP landscape in the company is most frequently cited as a challenge. 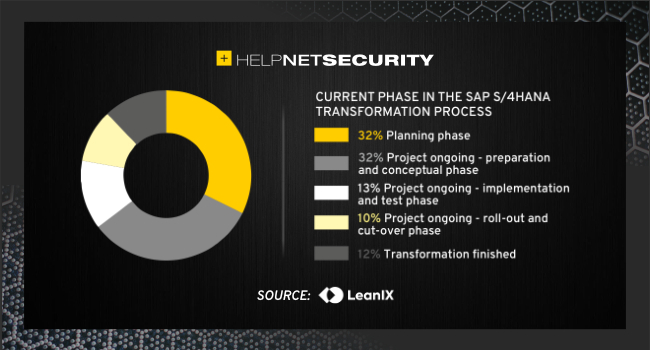 Even though enterprise architects are considered specialists in revealing such structures, their expertise is apparently underutilized: less than half of the architects surveyed consider their involvement in the SAP S/4HANA transformation to be sufficient. This is an indication that companies are paying too little attention to an important resource in-house.

SAP S/4HANA offers companies a multitude of opportunities with its postmodern ERP approach and yet the market is acting hesitantly. At the end of Q4 2020, Gartner expects 26 percent of existing customers to have licensed the suite. Of these, in turn, only slightly more than half are already live. In concrete terms, this means that only 14 percent of the 35,000 existing SAP customers worldwide have completed the transformation to S/4HANA.

Against this backdrop, LeanIX looks at its international customers and focuses on their enterprise architects: Where are companies in the SAP S/4HANA transformation and what is the role of EA teams? A total of 91 companies participated in the LeanIX SAP S/4HANA Survey in April 2021. Over 50 enterprise architects who are or have been involved in S/4HANA transformations also provided further detailed insight into their daily work.

S/4HANA is on the minds of almost everyone: 94 percent of the companies surveyed with SAP as their ERP vendor are planning or have already completed the transformation. However, as in the market as a whole, the process is not yet far advanced for most organizations: 32 percent of respondents in the survey are in the planning phase and the same number are in the initial preparation phase of the ongoing project.

Complexity of the SAP landscape is the biggest challenge

When asked about the challenges in the S/4HANA transformation, 80 percent cite the identification of dependencies within the complex and highly integrated ERP landscape. 67 percent of the enterprise architects surveyed describe creating a clear roadmap and target architecture for the future SAP landscape as a hurdle, and nearly 60 percent describe housekeeping SAP legacy applications and technology landscapes.

With the help of modern EA tools, EA teams can map precisely such complexities and provide comprehensive transparency that permeates all levels of the IT architecture. But when and how intensively are EA specialists involved in the S/4HANA transformation in their companies?

In the initial phase of the transformation, companies have to make a large number of significant decisions – related to the existing IT system landscape, strategic objectives and whether to run the ERP suite in the cloud or on-premise. Understanding the dependencies between all IT assets is a prerequisite.

Enterprise architects can deliver this data in high quality and map the SAP world in relation to the surrounding IT landscape to create transparency, develop scenarios for migration, and identify overlaps and dependencies. These three classic use cases of modern EA management play an important role at the beginning of the transformation and almost all architects seem to be involved in this phase. However, the question arises as to how intensively they are actually involved. 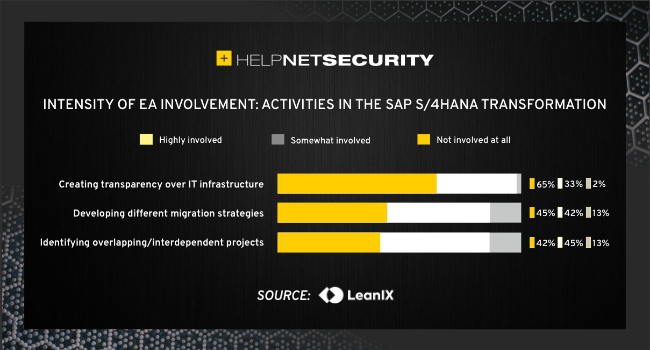 Nearly two-thirds of architects say they are heavily involved in creating visibility into the existing IT infrastructure. But, less than half of EA specialists report similar involvement in developing migration scenarios and identifying project overlaps and dependencies.

Enterprise architects consider their involvement to be expandable

Less than half of the enterprise architects feel that their involvement in the SAP S/4HANA transformation in the company is sufficient. A good third even describe it as “too low” or “much too low”. This is not surprising. This study has shown that many of them are only partially involved in topics for which they are actually the designated specialists in the company. 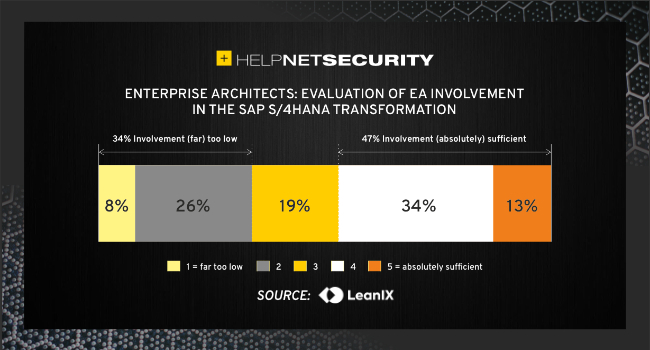 With a view to the end of support for SAP ECC, companies are running out of time with S/4HANA and personnel resources for external consulting are also becoming scarce. So much for the familiar topics in public discourse.

The current LeanIX SAP S/4HANA Survey adds another aspect to the discussion, because it appears that many companies are using their own resources less than possible.

As a result, they are giving away valuable potential, as LeanIX CEO André Christ explains: “Enterprise architects can make a decisive contribution to a successful S/4HANA migration with their know-how. It’s about a transformation for the entire business, not just a purely technological change. This is precisely where the architects’ particular strength lies: they do not simply deliver data, but link the IT landscape with the company’s business capabilities, thus providing a common language for business and IT. They are able to quickly identify and involve all relevant stakeholders. This is of great importance to ensure that such a huge transformation project can succeed.”