Software and hardware vulnerabilities are an ever-present threat to every enterprise. In response to the tedious and time-consuming processes often associated with traditional vulnerability management, enterprise IT administrators have started looking for better alternatives that can integrate with their existing IT management framework.

The solution integrates with the existing Active Directory framework of an enterprise and follows an agent-server model. Agents, which are the lightweight software that runs in the background of end-user machines, are responsible for collecting and reporting the state of every machine back to the main product server, installed at a centralized location. 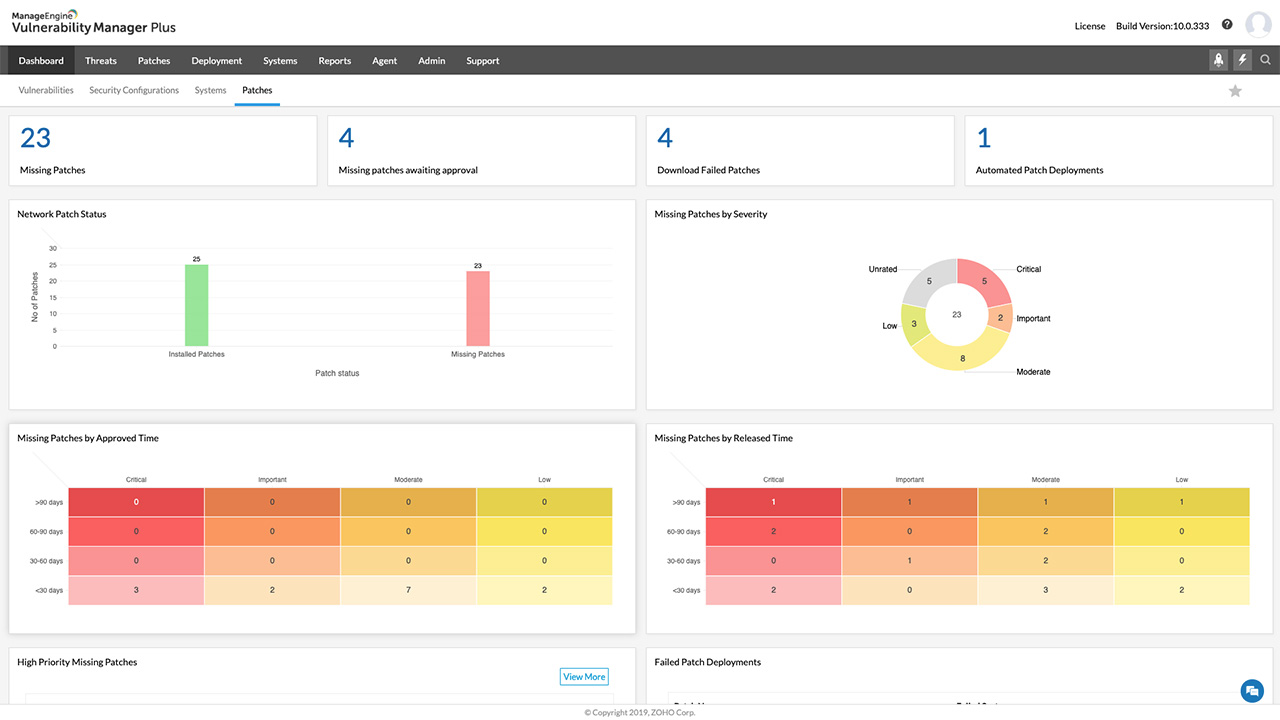 Vulnerability Manager Plus detects threats across network endpoints and displays them on an intuitive dashboard. Vulnerabilities are displayed according to their severity, which allows IT admins to focus on the ones that require their immediate attention.

By prioritizing critical vulnerabilities first, product users can catch threats as they appear, and can safeguard their network from potential breaches that may otherwise slip out of their radar. 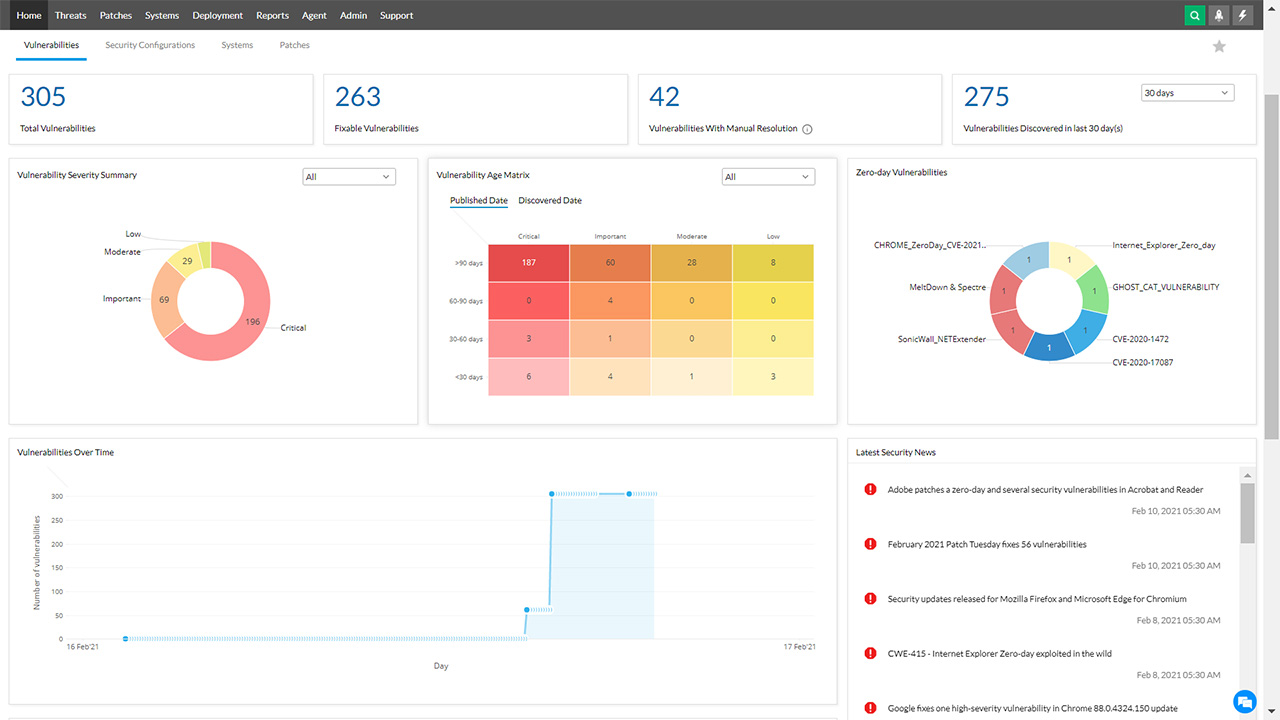 When patches for known vulnerabilities are not readily available from vendors, Vulnerability Manager Plus helps tighten security with the required configurations to mitigate threats.

In the event that a patch isn’t available for a publicly known vulnerability, the product can deploy mitigation scripts to prevent an exploit of this vulnerability. Once a patch becomes available, Vulnerability Manager Plus notifies users so they can apply the fix immediately.

Vulnerability Manager Plus features an extensive patch management console that allows you to automate the distribution of patches for machines running on Windows, Linux and macOS.

The onboard library of pre-tested third-party software updates saves significant time in manually downloading and preparing patches for deployment. Furthermore, product users get to automate the detection fully and distribution of patches, customized to suit their business requirements.

The product runs periodic scans to collect data from the endpoints in the network, and organizes this information for maximum ease of interpretation. This enables IT admins to quickly gather insights to understand the state of managed systems. Some of the insights are as follows:

Detection and remediation of security misconfigurations 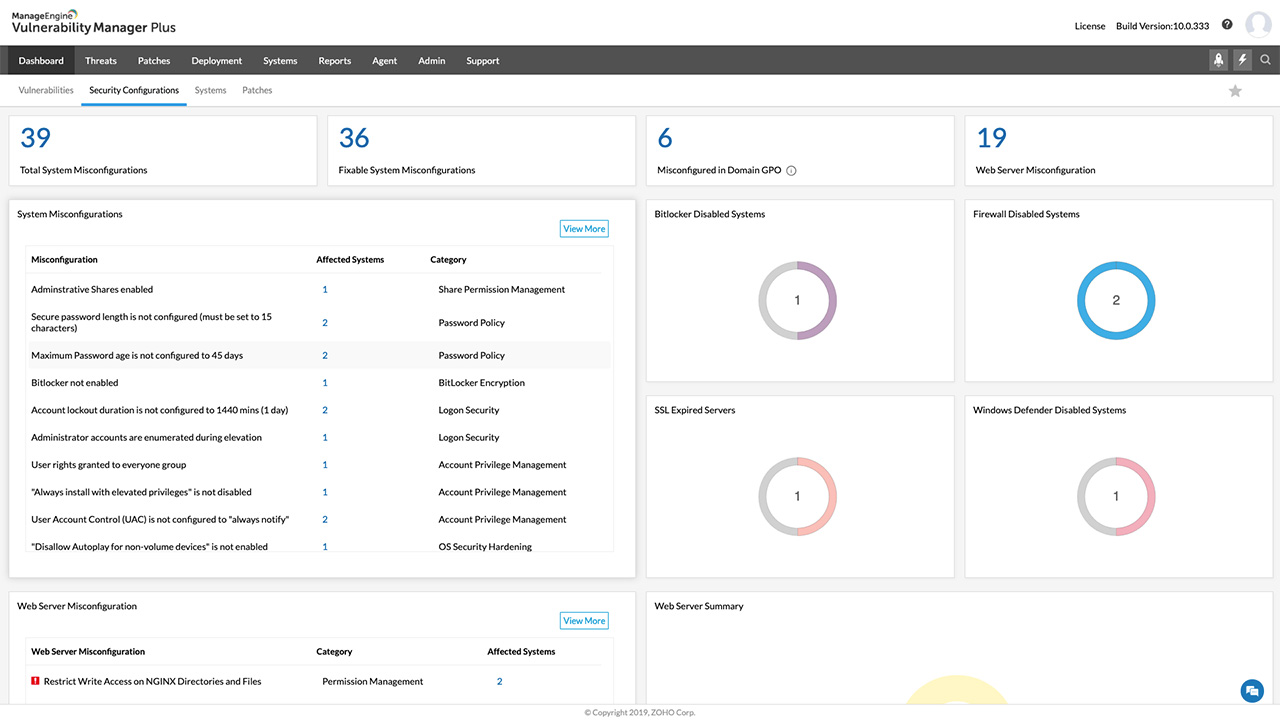 This feature adds an additional layer of security by only allowing applications from within the ‘safe zone’, as dictated by your enterprise to be installed on to client systems.

IT admins can perform audits for antivirus software in their network to determine if all antivirus solutions have the latest definitions. Vulnerability Manager Plus handles every aspect of network security, helping to take a stand against the various cyber-threats targeting enterprises today.

As seen in many of the ManageEngine products, organizations can start securing their network now with a 30-day free trial, after which they can upgrade to one of the paid versions.