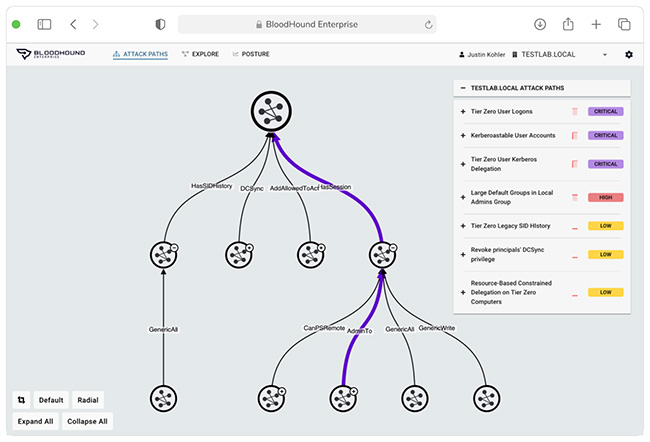 As a largely unseen, unmanaged and growing problem for enterprises, AD Attack Paths are used by attackers to gain control of systems and data, impersonate users, abuse legitimate access to non-AD systems and much more. This problem is compounded by mountains of misconfiguration debt in AD, making it difficult to create a strong security posture for AD security. Until BloodHound Enterprise there has not been a practical defensive tool that identifies and quantifies AD choke points, eliminating Active Directory as an attacker’s easiest, most reliable and biggest payoff target.

Microsoft AD provides identity and access management, endpoint management and business application management. It is an extremely high-value target for attackers because it is widely used and because it offers features that can give attackers the “keys to the kingdom” if compromised. Attack Paths are chains of abusable privileges and user behaviors that create direct and indirect connections between computers and users within AD.

Once an attacker compromises a system or device, they can use the privileges of those users to compromise other systems or devices until they reach their final objective. AD controls which users have access to which systems, so configuring AD correctly can close off these Attack Paths – if the organization is aware they exist.

Active Directory best practices such as least privilege access and tiered administration are almost never implemented correctly or at all, and Attack Paths are too numerous and dynamic for reactive security measures to be effective. BloodHound Enterprise solves these problems with: