Nearly 60% of those tasked with thwarting the multi-billion dollar threat posed by global crime rings are not yet up to the task, reports a study by the Coalition Against Insurance Fraud, IBM and Luxoft. 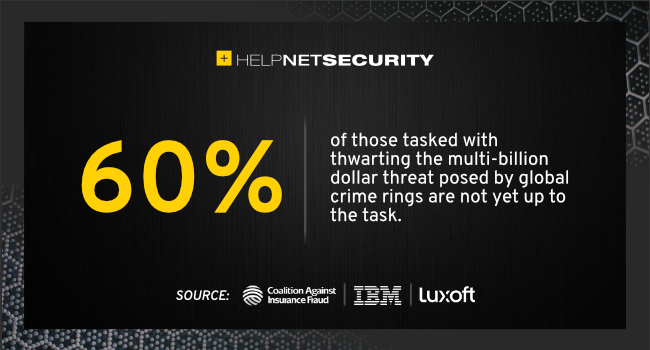 The study surveyed financial crimes experts, data security analysts, government regulators, insurance professionals and others to better understand how anti-fraud experts from around the world are dealing with international fraud rings.

The research found that fraud fighters – professionals tasked with investigating and prosecuting insurance fraud – in North America were the least prepared for threats from abroad.

“We’ve seen organized scammers exploit the telehealth system; intercept personal information through phishing scams and other data harvesting schemes; carry out ransomware attacks; and run a number of insurance scams using stolen or synthetic IDs off the dark web. These are all attacks that can be launched from anywhere in the world with a decent internet connection.”

Estimated cost of insurance fraud around the world

While there is no single estimate of the annual cost of insurance fraud around the world, an Insurance Europe report estimated there were €13 billion of fraudulent claims in the EU in 2017. Fraud accounted for about 10% of the property/casualty (PC) insurance industry’s incurred losses and loss adjustment expenses each year–– or $38 billion in 2020.

U.S. insurers and consumers suffer $80 billion in fraud across all lines of insurance each year. The FBI believes this costs the average American family between $400 and $700 in increased premiums per year.

The survey also identified preparedness gaps in planning for coordinated fraud attacks from abroad. “There’s a lack of confidence in the tools, resources and knowledge organizations have in place to combat globalized insurance fraud,” reads one of the study’s key findings. Less than half of the worldwide respondents felt even “Somewhat confident” their organizations are equipped to address global fraud as opposed to the 4% who are “Extremely confident” their team is prepared for the challenge ahead.

“The risk is real. The time to act is not tomorrow, but today,” concludes the study in an industry-wide call to action to: conduct more in-depth research on the globalization of insurance fraud; make deeper investments in A.I., data analytics, and emerging technology in the fraud detection space; promote knowledge sharing among fraud fighters; and to conduct threat analyses and develop internal plans and procedures to guard against global insurance fraud.