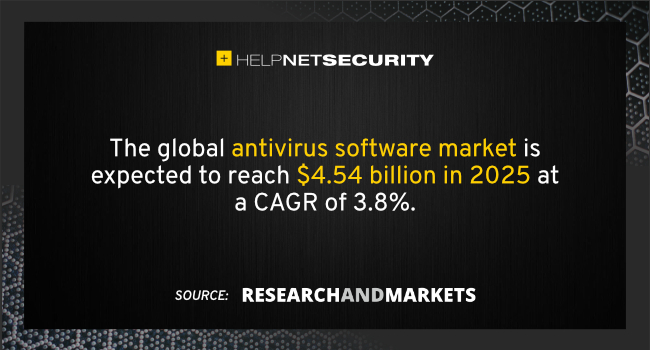 The antivirus software market consists of sales of antivirus software by entities (organizations, sole traders, and partnerships) that are used to protect computers from viruses by scanning, detecting, and removing them. Most antivirus software operates in the background once downloaded, providing real-time protection against virus attacks. All programs behavior is monitored by the anti-virus software, which flags any questionable behavior.

Cloud antivirus or cloud-based antivirus is a solution that offloads the work to a cloud-based server instead of bogging down the computer with an antivirus suite. Cloud antivirus protects PCs, laptops, and mobile devices by providing behavioral-based screening and updating malware software capable of transferring data.

The increasing number of cyber-attacks is expected to propel the growth of the antivirus software market in the coming years. A cyberattack is a cyberspace-based attack aimed at disrupting, disabling, destroying, or manipulating a computer or other device intentionally. There is an increase in hacking and data breaches in computers, laptops, and mobiles using viruses or malware. Antivirus software can block or prevent the virus or malware from entering the device and prevents cyberattacks.

For instance, in 2020, Air India, an Indian-based carrier airline company, reported hackers had compromised their servers and accessed the personal data of 4.5 million fliers. In India, in 2020 alone 1.16 million cyber security cases are registered. Therefore, the increasing number of cyber-attacks drives the market for antivirus software.