Remotely announced the results of a survey that details the degree to which enterprises have been left vulnerable to disruption in the wake of the rush to remote work by millions of employees during the Covid pandemic. 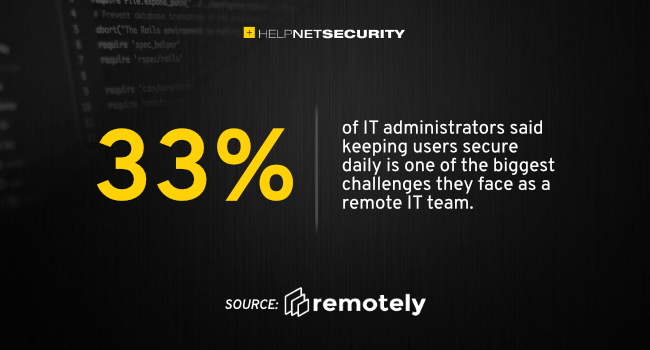 The poll of 600 system and IT administrators across the education, consulting, government, financial services, telecom, marketing, sales, and retail sectors was conducted in early January, 2022.

Asked, “What are the biggest challenges you face as a remote IT team in keeping users safe and productive?” almost 33 percent of respondents said, “Keeping users secure, daily.” That’s because 67.49 percent said they’re mired in the minutiae of provisioning services and apps, managing user identities, wrangling employees who have ignored best IT practices, and helping onboard new employees while trying to navigate the biggest and fastest physical workplace shift in decades.

Adding to those challenges are that sysadmins are working remotely without the advantages of the tools they once had at the office behind firewalls. 28 percent said, “Ensuring the tools remote IT teams have access to are as good or better than the ones they have on site” was the problem teams struggle with the most. Following closely behind was, “Remaining as productive as they were in the office,” “Collaboration among the sysadmin / IT admin team,” and “Tracking their own performance,” respectively.

Asked what jobs they spent the most time doing post Covid in order of importance, “Ensuring business continuity” ranked first; “Protecting users from themselves” was second; and lagging behind those was “Security/fight attempts to hack or compromise the network.” This lack of focus on security shows just how unprepared enterprises were to suddenly shift to a remote posture, where the biggest challenge is still ensuring employees can be productive.

“In the modern computing era, nothing has been more seismically disruptive to companies than the shift to remote work over the past two years.” said Tyler Rohrer, CEO, Remotely.

“Think about it: early in the pandemic, over the span of only two months, most of the corporate world left the office and was forced to dial into their networks. This left IT and systems admins scrambling just to keep the lights on, never mind ensuring the resilience of their networks’ security, which has also come under unprecedented assault. That was two years ago, and since then sysadmins are still forced into an untenable choice of keeping users productive, or the company safe.

“Automation of the mundane jobs that are keeping sysadmins away from the important work of ensuring their networks are secure is the best way to meet this new world order challenge.”

Given today’s challenges, systems and IT admins are of a single mind when it comes to which tasks are most important for them. Cybersecurity was their first priority, although the reality of their jobs has kept them from spending as much time on this as they’d like. Next was setting up a way to give end-users a self-service remedy for requests for password resets, then application access storage management, and other operations.