Physicists from the University of Amsterdam have proposed a new architecture for a scalable quantum computer. Making use of the collective motion of the constituent particles, they were able to construct new building blocks for quantum computing that pose fewer technical difficulties than current state-of-the art methods. 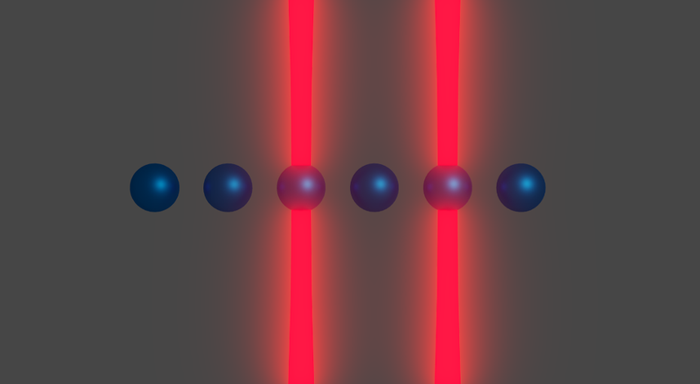 Two trapped ions (in blue) are selected by optical tweezers (in red). A quantum gate between the ions can be implemented using electric fields.

The effort combines two important ingredients. One is a so-called trapped-ion platform, one of the most promising candidates for quantum computing that makes use of ions – atoms that have either a surplus or a shortage of electrons and as a result are electrically charged. The other is the use of a clever method to control the ions supplied by optical tweezers and oscillating electric fields.

As the name suggests, trapped-ion quantum computers use a crystal of trapped ions. These ions can move individually, but more importantly, also as a whole. As it turns out, the possible collective motions of the ions facilitate the interactions between individual pairs of ions.

In the proposal, this idea is made concrete by applying a uniform electric field to the whole crystal, in order to mediate interactions between two specific ions in that crystal. The two ions are selected by applying tweezer potentials on them – see the image above.

The homogeneity of the electric field assures that it will only allow the two ions to move together with all other ions in the crystal. As a result, the interaction strength between the two selected ions is fixed, regardless of how far apart the two ions are.

A quantum computer consists of ‘gates’, small computational building blocks that perform quantum analogues of operations like ‘and’ and ‘or’ that we know from ordinary computers. In trapped-ion quantum computers, these gates act on the ions, and their operation depends on the interactions between these particles.

In the above setup, the fact that those interactions do not depend on the distance means that also the duration of operation of a gate is independent of that distance. As a result, this scheme for quantum computing is inherently scalable, and compared to other state-of-the-art quantum computing schemes poses fewer technical challenges for achieving comparably well-operating quantum computers.