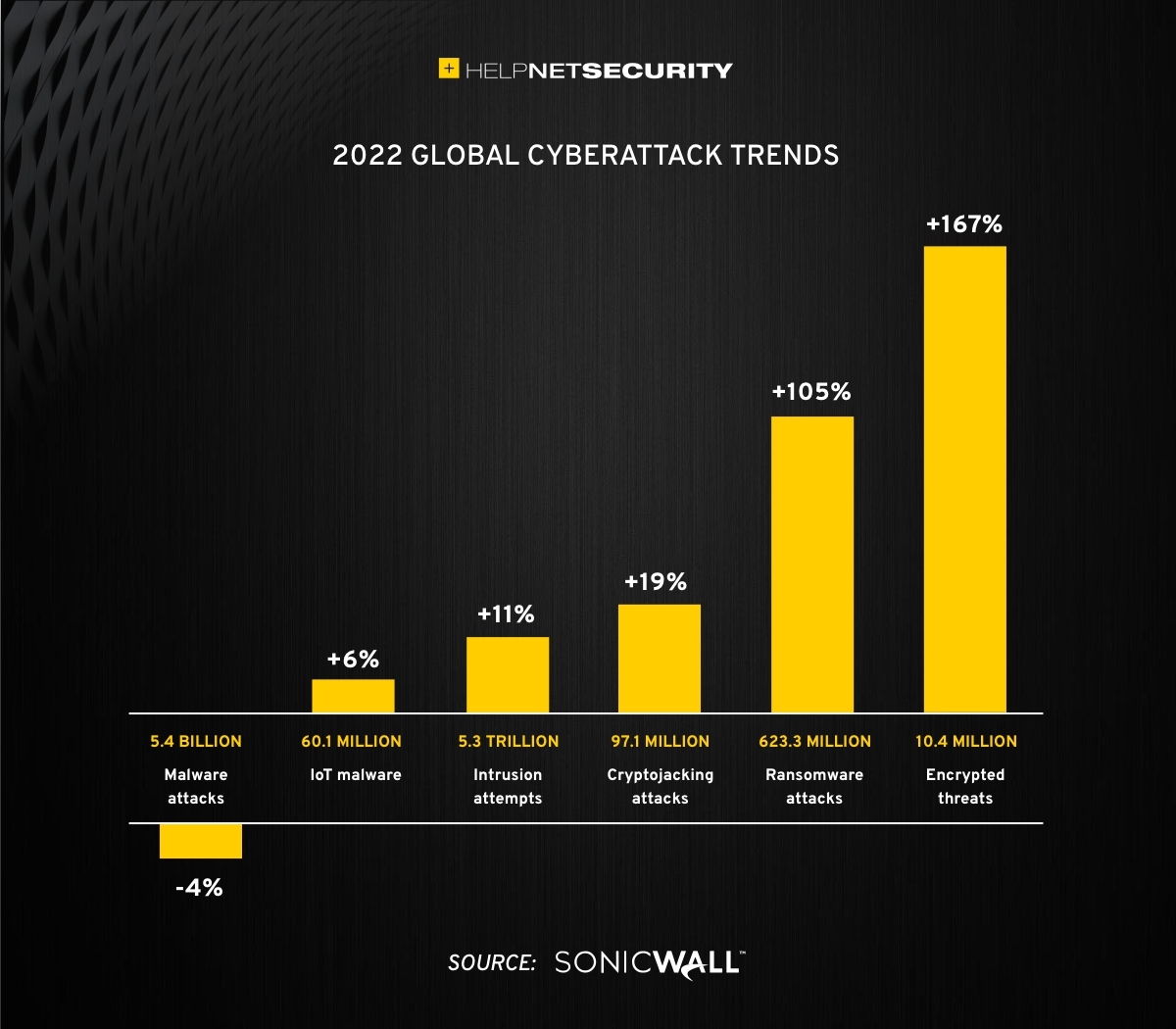 “Cyberattacks become more attractive and potentially more disastrous as dependence on information technology increases,” said SonicWall President and CEO Bill Conner. “Securing information in a boundless world is a near impossible and thankless job, especially as the boundaries of organizations are ever-expanding to limitless endpoints and networks.”

Researchers diligently tracked the dramatic rise in ransomware, recording an astounding 318.6 million more ransomware attacks than 2020, a 105% increase. Ransomware volume has risen 232% since 2019.

The frequency and variety of cyberattacks continue to expand every year, with an increasing cost to organizations worldwide. SMBs and enterprises are progressively threatened by an assortment of cyberattacks, and without knowing what they are, or how cybercriminals operate, protecting business-critical data from cyberattacks becomes unmanageable.

“Attacks on networks rose to a fever pitch in 2021,” said SonicWall VP of Platform Architecture Dmitriy Ayrapetov. “Ransomware, cryptojacking, vulnerably exploitation, phishing and other attacks continue to plague organizations around the world and overwhelm security teams. It’s important to understand the breakdown of these attacks and why they continue to be successful, as well as the drivers and trends behind them.”

Apache Log4j vulnerabilities were quickly exploited, with threat actors logging 142.2 million exploit attempts between Dec. 11 and Jan. 31 — an average of 2.7 million each day. Within three days of the public disclosure, exploit attempts had already passed the 1 million mark.

Malware volume was slightly down again in 2021, marking both a third-straight year of decrease as well as a seven-year low. However, an uptick in attacks during the second half of 2021 almost completely erased the 22% drop in malware that SonicWall had recorded at the mid-year point, bringing the total decrease for 2021 to just 4% — suggesting malware numbers may rebound in 2022.

Encrypted threats increased 167% year-over-year. In August, the number of encrypted attacks broke the 1 million mark for the first time, then continued to rise, reaching nearly 2.5 million by year’s end.

Cryptojacking continued to surge last year, rising 19% globally to 97.1 million, which is the most attacks that SonicWall Capture Labs threat researchers have ever recorded in a single year.

IoT malware volume rose 6% in 2021, totaling 60.1 million hits by year’s end. While this isn’t good news, it’s at least better than it has been: In 2019 and 2020, IoT malware volume rose 218% and 66%, respectively. With no corresponding slowdown in the proliferation of connected devices, this suggests that attack volumes may be leveling off.