Workato introduced Workato Enterprise Key Management (EKM) for its customers. The feature gives customers in highly regulated industries control, flexibility, and compliance over their encryption keys and their data inside of the Workato platform. 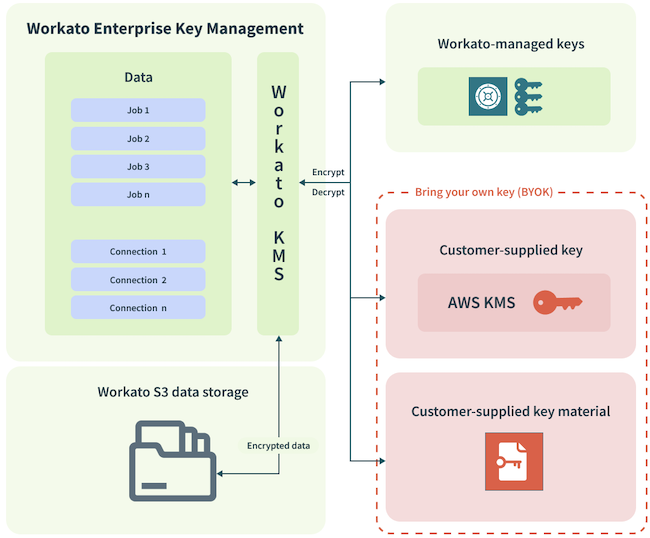 The presence of strict regulations that charge enterprises large fines for data breaches has resulted in the significant growth of the global encryption management solutions market, which is expected to increase by $6.07 billion from 2020 to 20251. In tandem, Enterprise Automation is also becoming more mainstream amongst some of the most regulated industries in the world such as banks/financial services, insurance, healthcare, and government.

The need for enterprise scale capabilities that afford an even higher level of security have become critical. For security conscious or regulated organizations that need complete control and visibility of their data stored in their enterprise automation platform, Workato is the only Enterprise Integration Platform as a Service (eiPaaS) vendor that offers customers the ability to bring their own keys to encrypt data and provides an extra layer of assurance and protection.

Workato has taken further measures to make data even more secure for all customers by rolling out new encryption algorithms. Leading companies including MGM Studios already trust Workato with their data.

“Workato EKM allows organizations like ours in highly regulated industries to take a more customized approach to how we encrypt data & logic in Workato by using our own keys,” said Manoj Parakkal, Salesforce Center of Excellence Lead and Senior Architect at MGM. “This is a critical requirement of any software we use at scale and we’re happy to see Workato’s leadership as the only integration or automation vendor offering support for EKM.”

“Comprehensive security and encryption solutions has always been a top priority for AWS. Extending our relationship with Workato allows our customers to better manage sensitive data using their encryption keys on AWS KMS,” said Madhu Raman, Worldwide Head Intelligent Automation at AWS. “This additional level of control gives our customers more authority over their sensitive data.”

“One of the reasons we partner with Workato is that they take great care to secure the data both in the Workato platform and across the thousands of applications customers integrate and automate with,” said Girish Pai, Global Head Intelligent Automation Practice at Cognizant. “The announcement of Workato EKM continues that commitment to security by allowing highly-regulated institutions an even deeper level of customization and control over their data.”

“We are excited to bring Workato EKM to our customers as data security will only continue to grow in importance for organizations of all sizes,” said Jayesh Shah, Senior Vice President, Global Solutions Consulting and Operations at Workato. “I hear about the impact that wall-to-wall enterprise automation makes from our customers every day, and I’m thrilled to see more and more highly regulated industries begin to take advantage of automation.”

As an enterprise automation platform, security has always been a top priority for the platform that manages different sets of data including human resources, financial, and IT data. Workato EKM is an additional component customers can add on top of the platform’s comprehensive security and governance capabilities. To date, Workato is HIPPA Type 1, GDPR, FedRAMP, StateRAMP and SOC 2 Type 2 compliant.