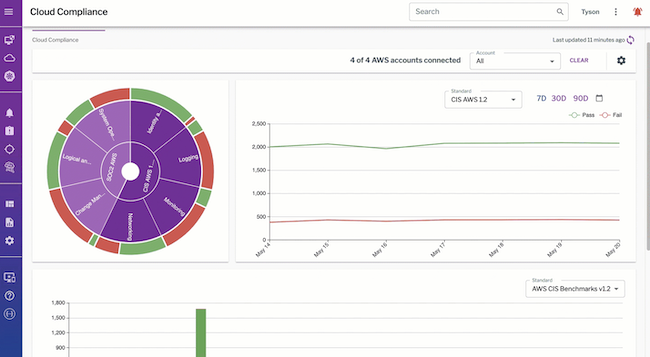 In addition, Uptycs announced CSPM support for Google Cloud Platform (GCP) and Microsoft Azure, and PCI compliance coverage. These new capabilities provide Security and Governance, Risk, and Compliance teams with continuous monitoring of cloud services, identities, and entitlements so they can better reduce their cloud risk.

“Disparate cloud security solutions only deliver pieces of the picture, leaving Security teams unaware of new risks in a fast-changing cloud environment,” says Ganesh Pai, CEO and co-founder of Uptycs. “As organizations scale out their cloud footprints—including across multiple public cloud providers—they need new types of security controls, especially in the realm of cloud identity and entitlement. Uptycs provides a unified platform for CSPM and CWPP that gives Security teams a holistic and fully integrated platform for securing their cloud resources, workloads, and infrastructure.”

As they add cloud accounts, resources, and infrastructure, the number of user and machine identities grows exponentially. The majority of these identities have more access than they need to do their jobs, posing a serious risk if an attacker is able to steal credentials. According to Gartner, more than 95% of accounts in IaaS use, on average, less than 3% of the entitlements they are granted. In addition, Gartner estimates that “by 2023, 75% of security failures will result from inadequate management of identities, access and privileges, up from 50% in 2020.”

With new cloud identity and entitlement analytics capabilities in Uptycs, Security and Governance teams can solve these challenges:

The cloud identity and entitlement analytics capabilities are generally available for AWS as an add-on for the Uptycs CSPM offering. Uptycs’ broader CSPM support for GCP and Azure (inventory, audit, compliance, and threat detection) is generally available.