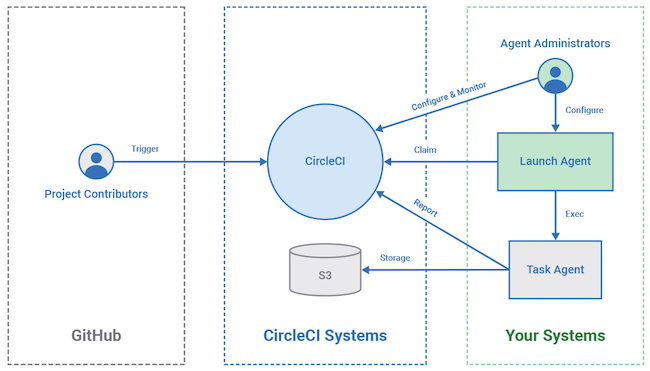 Founded in 2011, CircleCI has always been at the forefront of software development. As the largest CI/CD platform serving thousands of companies across the globe, CircleCI empowers its customers to take ideas to execution, at scale, by fine-tuning the development process from start to finish.

CircleCI’s self-hosted runners bring CircleCI’s powerful cloud to any unique infrastructure or compliance use case, allowing enterprise-level teams or those in highly regulated industries the ability to build and test on a wider variety of architectures, as well as have additional control over the environment.

Many customers use CircleCI’s self-hosted runners to monitor and adjust their runner pools to match the demands of their cloud pipelines, make informed scaling decisions, and identify and remediate stuck jobs or failed infrastructure.

In addition, today self-hosted customers can take advantage of the following:

“Being able to move quickly and reliably is no longer ‘nice to have’ but core to the responsibilities of today’s engineering teams,” said Jim Rose, CircleCI, CEO. “CircleCI’s latest additions will make it easier for enterprise-level customers or those in highly regulated industries to have deeper access to the most intelligent and performant CI/CD tooling on the market.”

These updates come on the heels of CircleCI’s introduction of a simplified self-hosted runner user experience by adding the ability for customers to download self-hosted runners in five minutes or less directly from the CircleCI user interface, in addition to adding self-hosted runner capabilities to all CircleCI plans, including the most generous free CI/CD tier for developers.