Trend Micro predicted that ransomware groups will increasingly target Linux servers and embedded systems over the coming years. It recorded a double-digit year-on-year (YoY) increase in attacks on these systems in 1H 2022. 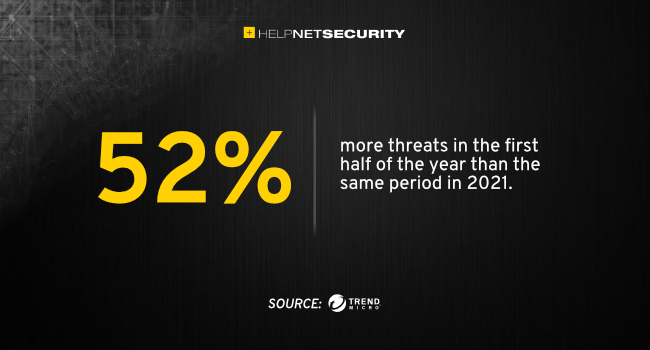 Jon Clay, VP of threat intelligence for Trend Micro, said: “New and emerging threat groups continue to evolve their business model, focusing their attacks with even greater precision. That’s why it’s essential that organizations get better at mapping, understanding, and protecting their expanding digital attack surface. A single, unified cybersecurity platform is the best place to start.”

According to the data:

New ransomware groups are emerging all the time

The most notable one in the first half of 2022 is Black Basta. The group hit 50 organizations in just two months. Many persist with the “big game-hunting” of large enterprises, although SMBs are an increasingly popular target.

One of the primary attack vectors for ransomware is vulnerability exploitation. Trend Micro’s Zero Day Initiative published advisories on 944 vulnerabilities in the period, a 23% YoY increase. The number of critical bug advisories published soared by 400% YoY.

APT groups continue to evolve their methods by employing expansive infrastructure and combining multiple malware tools. The ten-fold increase in the number of detections is another proof point that threat actors are increasingly integrating Emotet as part of their elaborate cybercrime operations.

The concern is that threat actors are able to weaponize these flaws faster than vendors can release patch updates and/or customers can patch them.

Unpatched vulnerabilities add to a growing digital attack surface many organizations are struggling to manage securely as the hybrid workplace expands their IT environment. 43% of global organizations believe it is “spiraling out of control.”