Earlier today, many Instagram users were faced with an alarming message when they tried to use the service: 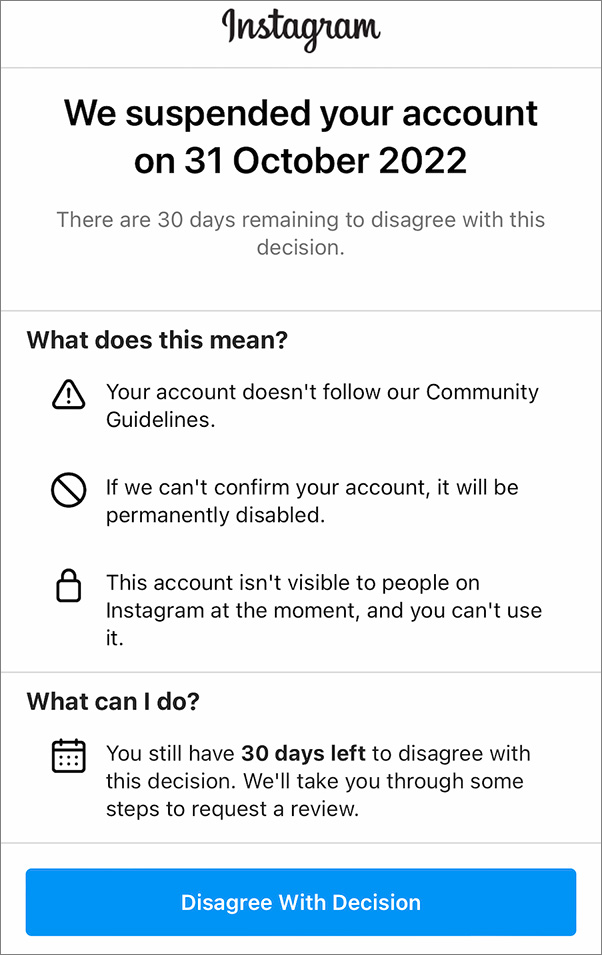 Clicking on the “Disagree with decision” button lead the users to either a perpetually loading screen, a “Try again later” message, or a request to enter their username, password and security code to verify their account.

Some received the code, some didn’t – even after many attempts, after which they got blocked. Some of the former entered the code, and were again faced with a loading screen. Some where automatically logged out and, after trying to log in again, are being told by Instagram that the account with that email address or phone number does not exist. Some say that the problem with security code verification started even earlier.

By following the #instagramdown hashtag on Twitter – where many affected users have flocked to complain to Instagram and see if others were affected – one can see that this “outage” hit users around the world. But, as I discovered by polling my colleagues who use Instagram, not all users in the same geographic location have had their account suspended.

“We’re aware that some of you are having issues accessing your Instagram account. We’re looking into it and apologize for the inconvenience,” Instagram’s PR team posted on Twitter a few hours ago, and hasn’t been answering affected users’ frantic cries for help or an explanation (well, at least not publicly).

The Verge reported that many accounts were losing followers by the thousands or even millions, which also seems a consequence related to this issue.

On Reddit’s Instagram subreddit, some users are saying that they’ve been able to get back into their account (and warning about possible scams related to this service outage), but there is still no official confirmation from Instagram.

We’ll update this piece when we know more about the cause of this outage / account suspension wave.

Instagram’s PR team saysthe bug that created the issue has been resolved, but comments from users show that many are still having problems accessing their account(s).