The world’s most heavily trafficked web domain, .COM, is now the riskiest, according to McAfee’s “Mapping the Mal Web” report released today. Fifty-six percent of all risky sites end in .COM. 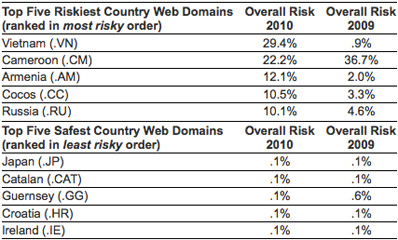 McAfee analyzed more than 27 million websites to uncover which domains are the most dangerous. While .COM is the riskiest top-level domain, the riskiest country domain is Vietnam (.VN). Japan’s .JP ranks as the safest country domain for the second year in a row. The report also found that 6.2 percent of the 27 million websites analyzed pose a security risk – up from 5.8 percent last year.

“This report underscores how quickly cybercriminals change tactics to lure in victims and avoid being caught,” said Paula Greve, director of web security research for McAfee Labs. “Last year Vietnam’s .VN was a relatively safe domain, and this year it jumped to the third most dangerous domain. Cybercriminals target regions where registering sites is cheap and convenient and pose the least risk of being caught. A domain that’s safe one year can be dangerous the next.” 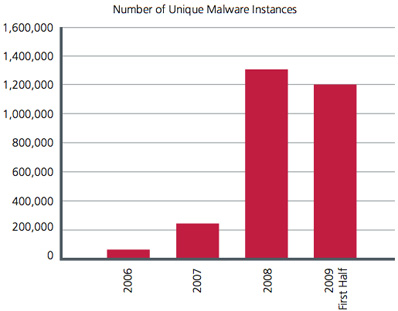 The report reveals drastic changes in country domain rankings with .VN (Vietnam) skyrocketing to third place, up from 39th in 2009. In fact, 58 percent of the country’s registered sites are ranked as risky.

By contrast, .SG (Singapore) became safer this year, dropping to the 81st most risky domain from 10th in last year’s report. Singapore’s registration process now requires appropriate documentation when seeking to register any .SG site, which helped to improve its safety levels, according to the Singapore Network Information Center.