Data loss through cyber attacks decreased sharply in 2010, but the total number of breaches was higher than ever, according to the “Verizon 2011 Data Breach Investigations Report.” These findings continue to demonstrate that businesses and consumers must remain vigilant in implementing and maintaining security practices. 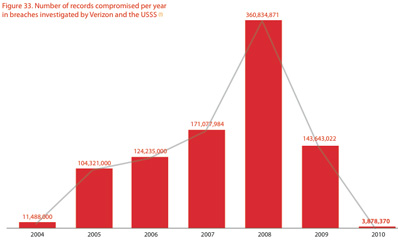 The number of compromised records involved in data breaches investigated by Verizon and the U.S. Secret Service dropped from 144 million in 2009 to only 4 million in 2010, representing the lowest volume of data loss since the report’s launch in 2008. Yet this year’s report covers approximately 760 data breaches, the largest caseload to date.

The seeming contradiction between the low data loss and the high number of breaches likely stems from a significant decline in large-scale breaches, caused by a change in tactics by cybercriminals. They are engaging in small, opportunistic attacks rather than large-scale, difficult attacks and are using relatively unsophisticated methods to successfully penetrate organizations. For example, only 3 percent of breaches were considered unavoidable without extremely difficult or expensive corrective action.

The report also found that outsiders are responsible for 92 percent of breaches, a significant increase from the 2010 findings. Although the percentage of insider attacks decreased significantly over the previous year (16 percent versus 49 percent), this is largely due to the huge increase in smaller external attacks. As a result, the total number of insider attacks actually remained relatively constant. 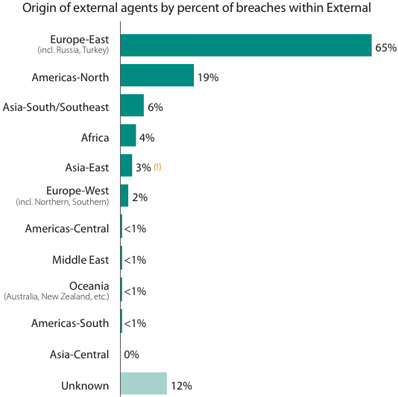 Hacking (50 percent) and malware (49 percent) were the most prominent types of attack, with many of those attacks involving weak or stolen credentials and passwords. For the first time, physical attacks — such as compromising ATMs –appeared as one of the three most common ways to steal information, and constituted 29 percent of all cases investigated.

The Data Breach Investigation Report (DBIR) series now spans seven years and more than 1,700 breaches involving more than 900 million compromised records, making it the most comprehensive study of its kind.

Large-scale breaches dropped dramatically while small attacks increased. The report notes there are several possible reasons for this trend, including the fact that small to medium-sized businesses represent prime attack targets for many hackers, who favor highly automated, repeatable attacks against these more vulnerable targets, possibly because criminals are opting to play it safe in light of recent arrests and prosecutions of high-profile hackers.

Physical attacks are on the rise. After doubling as a percentage of all breaches in 2009, attacks involving physical actions doubled again in 2010, and included manipulating common credit-card devices such as ATMs, gas pumps and point-of-sale terminals. The data indicates that organized crime groups are responsible for most of these card-skimming schemes.

Hacking and malware is the most popular attack method. Malware was a factor in about half of the 2010 caseload and was responsible for almost 80 percent of lost data. The most common kinds of malware found in the caseload were those involving sending data to an external entity, opening backdoors, and keylogger functionalities.

Stolen passwords and credentials are out of control. Ineffective, weak or stolen credentials continue to wreak havoc on enterprise security. Failure to change default credentials remains an issue, particularly in the financial services, retail and hospitality industries.