Enterprise and consumer mobile devices are exposed to a record number of security threats, including a 400 percent increase in Android malware, as well as highly targeted Wi-Fi attacks, according to a report by Juniper Networks.

With smartphones set to eclipse PCs as the preferred method of both personal and professional computing, cyber criminals have turned their attention to mobile devices.

At the same time, the gap between attacker capabilities and an organization’s defenses is widening. These trends underscore the need for further mobile security awareness, as well as more stringent, better integrated mobile security policies and solutions. 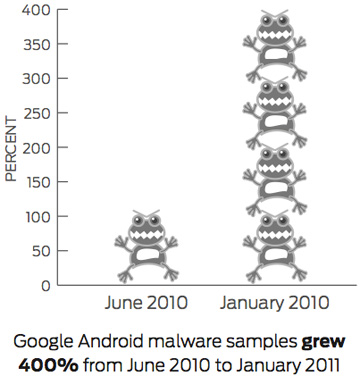 “The last 18 months have produced a non-stop barrage of newsworthy threat events, and while most had been aimed at traditional desktop computers, hackers are now setting their sights on mobile devices. Operating system consolidation and the massive and growing installed base of powerful mobile devices is tempting profit-motivated hackers to target these devices,” Jeff Wilson, principle analyst, Security at Infonetics Research. “In a recent survey of large businesses, we found that nearly 40 percent considered smartphones the device type posing the largest security threat now. Businesses need security tools that provide comprehensive protection: from the core of the network to the diverse range of endpoints that all IT shops are now forced to manage and secure.”

App store anxiety: The single greatest distribution point for mobile malware is application download, yet the vast majority of smartphone users are not employing an antivirus solution on their mobile device to scan for malware.

Wi-Fi worries: Mobile devices are increasingly susceptible to Wi-Fi attacks, including applications that enable an attacker to easily log into victim email and social networking applications.

The text threat: 17 percent of all reported infections were due to SMS trojans that sent SMS messages to premium rate numbers, often at irretrievable cost to the user or enterprise.

Device loss and theft: 1 in 20 Juniper customer devices were lost or stolen, requiring locate, lock or wipe commands to be issued.

“These findings reflect a perfect storm of users who are either uneducated on or disinterested in security, downloading readily available applications from unknown and unvetted sources in the complete absence of mobile device security solutions,” said Dan Hoffman, chief mobile security evangelist at Juniper Networks.

“App store processes of reactively removing applications identified as malicious after they have been installed by thousands of users is insufficient as a means to control malware proliferation. There are specifics steps users must take to mitigate mobile attacks. Both enterprises and consumers alike need to be aware of the growing risks associated with the convenience of having the Internet in the palm of your hand,” he added.