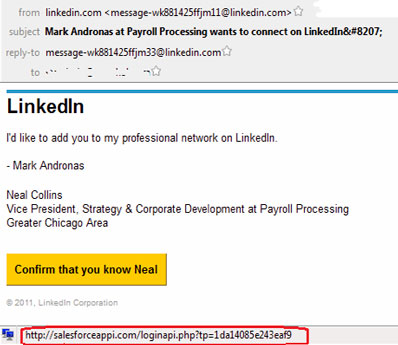 If the look of the message seems familiar, it is because the scammers have used the legitimate LinkedIn email template and modified it to suit their needs – i.e. they have changed the link behind the confirmation button.

Simply pointing the mouse on it reveals that the destination URL is not on LinkedIn, but on the salesforceappi.com (not to be confused with the legitimate salesforceapi.com domain).

But, for those users who get tricked into following the link, the mischief is done – an exploit kit at the destination server tries to exploit a number of vulnerabilities in the their systems in order to load malware on it, warn M86 Security’s researchers.