A report unearths how “trusted malware” is continuing to grow at an alarming rate. In Q2, AVG has seen an increase in the number of stolen digital certificates used to sign malware, before being distributed by hackers.

A significant increase of over 300% was identified at the start of 2011, compared to the whole of 2010. The practice of trusting signed files is rapidly losing its strength. 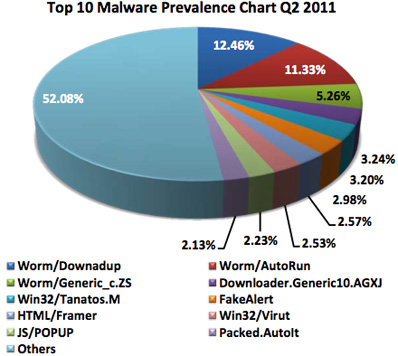 Increasingly, cyber crooks are using mobile malware to monetize using premium SMS and fake apps. Monetizing techniques via mobile are much easier to operate than those in use on PC. By spamming users to download apps or simply posting them on download stores or markets, the software distribution is easy and scalable.

The report provides insight into the most prevalent malware targeting online banking in the past few years – SpyEye. The rise in SpyEye means that users of internet banking need to be extra vigilant, especially as victims of cyber attacks are increasingly considered to be accountable.

A recent court ruling in the US concluded that it was in fact the victim’s responsibility to protect their account credentials, rather than the bank – namely via the use of internet security and identity protection tools.

The AVG Threat Labs investigated the operation of 702 Command and Control servers in the first half of 2011. The research results match the geo location of the servers as well as the popularity of the various malware versions in use by each C&C. The US holds the lead in Command and Control Servers with 30% of the market share, followed by Ukraine with 22%.

The United States still remains the dominant source of spam with English as the main language used in spam messages, followed by the UK with Brazil only just coming third. However, Brazil is rapidly closing that gap and is on course to overtake the UK, likely in the next quarter.

“In Q2 cybercriminals have clearly been shifting their focus to new markets, with a clear goal on increasing revenue from their operations,” said Yuval Ben-Itzhak, Chief Technology Officer, AVG Technologies.

“The World Wide Web might as well be re-branded as the World Wild Web. Our research indicates that hundreds of live servers operating around the world are active 24/7 to steal users’ credentials for online banking and other private assets. As attack techniques of hackers continue to get more advanced, users need to take action. Security products, with multi-layers of protection, are a must have to protect against the potentially damaging threats that lurk on the web. The user’s computer platform is becoming irrelevant for these cyber criminals – Windows, Android, Mac and iOS are all targeted now.”