It has been another busy weekend for the AntiSec initiative.

First Anonymous and LulzSec released a 10GB data dump consisting of the information pilfered from the servers of over 70 US law enforcement institutions compromised last week.

The dump was definitely planned, but Anonymous pointed out that this was also a way of showing that the various denials on behalf of various Sheriff’s offices of data having been stolen in the hits are untrue.

Then, a group of hackers under the banner of LulzSec Brazil made public a batch of documents belonging to Brazil’s Federal Police, which contain transcripts of phone and email interceptions tied to a high-profile corruption and money laundering investigation concluded three years ago.

Lastly, Anonymous hijacked the website of the Syrian Ministry of Defense and posted a message of support for the Syrian protesters: 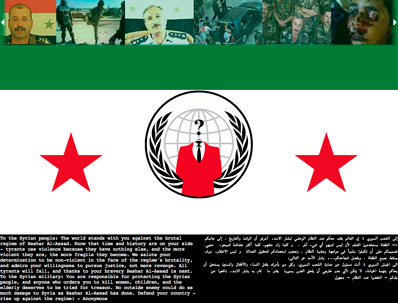 “To the Syrian people: The world stands with you against the brutal regime of Bashar Al-Assad. Know that time and history are on your side – tyrants use violence because they have nothing else, and the more violent they are, the more fragile they become. We salute your determination to be non-violent in the face of the regime’s brutality, and admire your willingness to pursue justice, not mere revenge. All tyrants will fall, and thanks to your bravery Bashar Al-Assad is next,” said in the message.

They also included a message for the Syrian military, saying that they are responsible for protecting the Syrian people. “Defend your country – rise up against the regime!”, they signed off.