In the wake of the news that Google has again been removing Premium SMS fraudulent apps masquerading as popular games from its the official Android Market, TrendMicro’s Kervin Alintanahin has decided to share a few tips on how to detect apps that might not be legitimate and – what’s worse – downright malicious.

First, it pays to know who the developers behind the most popular apps (especially games) are. If you are aware that, for example, the developer of Angry Birds is Rovio Mobile, the fact that other developers offering a game named the same or an app purporting to be an addition for the game should make you suspicious. 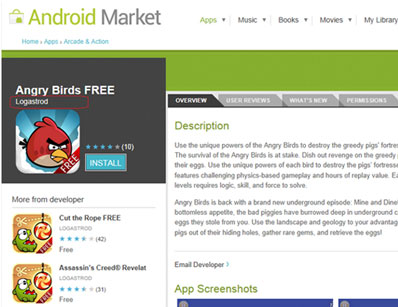 “Users can also check the developer’s profile for other apps. Google also offers developer ratings, as well as the status ‘Editor’s Choice’ that can further validate the developer’s legitimacy,” he says. “The same goes for other information on the app’s web page, such as the app’s icon and name. If something’s seems amiss, then it’s probably better to skip downloading it.”

Then, check the number and the quality of the reviews. A small number of very short and generic reviews for an extremely popular game is a sure sign that something is amiss.

Finally, check other sites for reviews of the app you’re thinking of downloading. “Getting more feedback, preferably from different sources will definitely help verify the app’s quality,” he points out. “This is very important especially since cybercriminals will also most likely try to fool users through feedback. They can post misleading reviews and give inaccurate ratings to trick the users into thinking that a particular app is legitimate.”