McAfee and the Security and Defence Agenda (SDA) revealed the findings from a report that paints a global snapshot of current thinking about the cyber-threat and the measures that should be taken to defend against them, and assesses the way ahead. 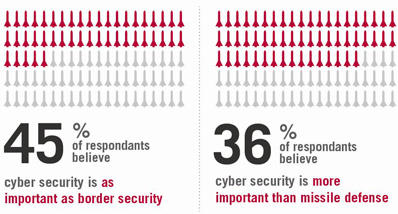 Here are some noted findings:

Real-time sharing of global intelligence was a core recommendation of the report, citing that the building of trust between industry stakeholders by setting up bodies to share information and best practices, like the Common Assurance Maturity Model (CAMM) and the Cloud Security Alliance (CSA). “The core problem is that the cyber criminal has greater agility, given large funding streams and no legal boundaries to sharing information, and can thus choreograph well orchestrated attacks into systems,” says Phyllis Schneck, Vice President and Chief Technology Officer, Global Public Sector, McAfee. “Until we can pool our data and equip our people and machines with intelligence, we are playing chess with only half the pieces.”

Experts interviewed also agreed that developments like smart phones and cloud computing mean we are seeing a whole new set of problems linked to inter-connectivity and sovereignty that require new regulations and new thinking. Last year, McAfee issued a Q3 threat report that stated that the total amount of malware targeted at Android devices jumped 76 percent from Q2 of 2010 to Q2 of last year, to become the most attacked mobile operating system.

Need to address expected shortage of cyber workforce: More than half (56%) of the respondents highlight a coming skills shortage.

Cybersecurity exercises are not receiving strong participation from industry: Although almost everyone believes that exercises are important, only 20% of those surveyed in the private sector have taken part in such exercises.

Risk assessment: Prioritize information protection, knowing that no one size fits all. The three key goals that need to be achieved are confidentiality, integration and availability in different doses according to the situation.