Users searching for games on the official Android Market have lately been heavily targeted by ad-pushing scammers. First it was the fake Temple Run app, and now a string of bogus copies of popular iPhone games supposedly developed by Rovio Mobile Ltd, the developers of the famous Angry Birds game: 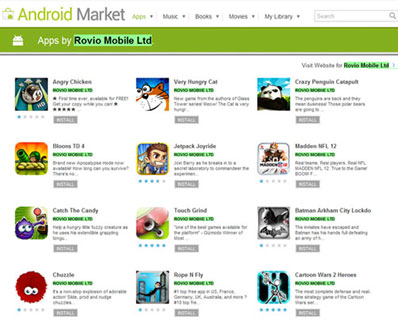 In reality, some of these games are offered by other developers – mostly on Apple’s iPhone Apps Store – and some do not even exist, but the scammers are trying to take advantage of the fact that Angry Birds’ developer Rovio has become a very well known and trusted name.

So how could the scammers register their account under that name? The explanation is very simple: they used a capital “I” instead of a lowercase “L” in “Mobile” and the result was a legitimate looking account.

“It is quite tricky and easy to miss. Users would really have to check the developer’s name closely on the ‘More from developer’ tab to see the real name,” points out Trend Micro.

Once the user tries to install any of the apps, he is faced with an image taken from the original app and instructions to follow a link in order to complete the process and to unlock the “full version”.

But the link leads to a webpage hosting advertisements for diet pills, and entices the users to sign in to find out how they can get three bottles of pills for free. This obviously has nothing to do with the game, and could alert many to its real nature, but there are always going to be users who fall for the scheme and will share a lot of their personal and perhaps even financial information in return for something “for free”.

We can surely expect more of this type of bogus apps being offered on the official Android Market, unless Google’s Bouncer gets upgraded to flag these types of apps faster and more accurately, or until the company decides to vet apps before they are allowed to be offered.