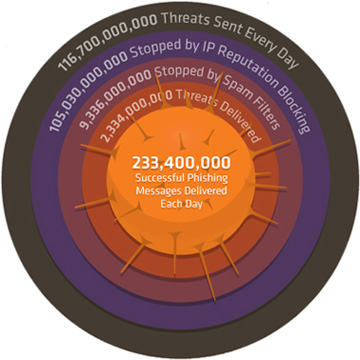 This year’s Sumo Awards focus on the successful characteristics of phishing attacks against the banking industry. Leveraging Agari’s Big Data Platform, which spans more than one billion mailboxes, Agari isolated and studied the one percent of phishing attacks on U.S. banks that succeeded to understand how they beat the defenses and landed in the inbox.

By analyzing millions of successful phishing schemes that made it into the inboxes of unsuspecting banking customers, Agari reveals core vulnerabilities that apply worldwide and across industries. While traditional email security technologies thwart the majority of spam and phishing schemes, this latest data shows that criminals are changing tactics and devising new and creative ways to get around these systems.

The first Sumo Dishonors go to:

Attacks are most often aided and abetted by system administrators who deploy unprotected infrastructure within organizations that criminals discover and exploit. An accomplice to the crime, system administrators could have thwarted approximately 25% of successful phishing attacks against banks by simply patching known hardware and software vulnerabilities, thereby eliminating the use of legitimate, company infrastructure for disseminating malicious attacks.

Agari research revealed that only half a percent of successful banking phish were sent by Botnets, signaling the tail end of “The Botnet Era.” To be successful, criminals are relying on more sophisticated schemes that can only be prevented through new anti-phishing models and technologies.

“The insight that system administrators are indirectly responsible for 25% of e-mail borne threats might be surprising, but is in line with our data from the Laws of Vulnerabilities analysis on patching speed,” said Wolfgang Kandek, CTO of Qualys. “Agari provides visibility into organizations’ e-mail traffic, and its Software-as-a-Service model makes it easily accessible.”