With high-speed Internet being now a common enough thing in many parts of the world, many users have taken to watching films and videos via online streaming.

Unfortunately, cyber crooks have also become aware of this and have began taking advantage of it.

BitDefender researchers have recently spotted a bogus online video player by the name of Web Player being offered to users searching for media players through Google.

The player does seem legitimate at first glance. During the installation process it presents an EULA and information about its supposed developer, but once installed, it asks users to log in with an email address and a password: 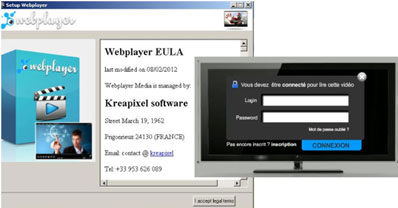 Even though users don’t have to share that information with the software to be able to “connect” to the video, there is no doubt in my mind that many inexperienced ones do, thus allowing the crooks to access their email accounts.

According to the researchers, no matter what data the victims type in, they are redirected towards an HTML page that allegedly offers a free-of-charge movie online player for a variety of classic movies and new releases.

The pages to which the users are taken change constantly, as they often get blocked by antivirus vendors. But all of them require users to “register” with their credit card data in order to watch the movies they want.

So, not only did the users get scammed to share their email credentials, but also their credit card data. Unfortunately, armed with this information, cyber crooks can do a lot of damage to the users’ bank accounts and online reputation.