A US Airways-themed spam campaign aiming at infecting users with a variant of the Zeus banking Trojan has been hitting inboxes for the last two weeks, says Kaspersky Lab expert Dmitry Tarakanov, but warns that it is definitely not the only one employed by the criminals behind the scheme.

This particular spam email purportedly contains the confirmation code and the online reservation details needed for the users to confirm their flight reservation: 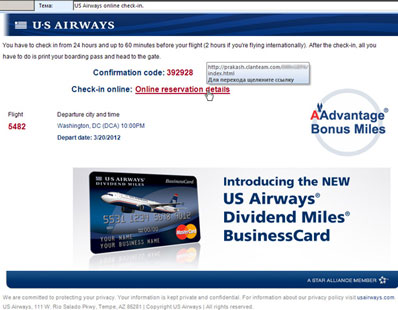 Unfortunately, the offered links take users to one of a number of compromised domains containing malicious javascripts that perform a number of redirections and finally land the victims on a domain hosting the BlackHole exploit kit.

Once the kit exploits a vulnerability in Java, Flash Player or Adobe Reader, a downloader that ultimately connects to a C&C server and downloads and runs the GameOver Zeus variant is dropped into the machine.

“At all the stages of this attack, every object — domains, links to javascripts, files with exploits, the downloader and ZeuS — was frequently replaced with a new one,” says Taranakov. “The domains remained ‘alive’ for nearly 12 hours, while the ZeuS samples were replaced more often.”

Given that the exploits, downloaders and ZeuS modifications used by the cybercriminals in this attack have been detected mostly by Russian, US, Italian, German and Indian Kaspersky users, he speculates that this spam campaign was and is not the only method used by these cyber crooks to spread ZeuS.