Just two months from its inauguration date at the RSA Conference in San Francisco on February 29, the Trustworthy Internet Movement (TIM) announced today that it has chosen SSL governance and implementation across the Internet as its first project. 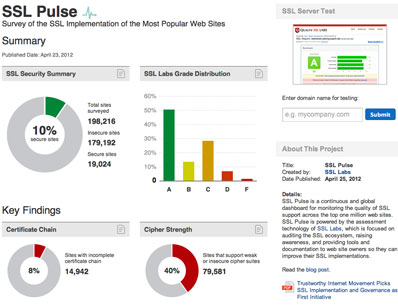 In addition, TIM launched SSL Pulse, a new index that tracks the progress of how well SSL is implemented across the top one million web sites.

The TIM SSL Internet Taskforce will engage experts to objectively review all proposals to fix both SSL and Certificate Authority (CA) ecosystems. Based on this independent review, the taskforce will identify new recommendations aimed at steering the evolution of these ecosystems towards improved security.

“Nothing can be safe forever. The real question is not whether SSL is safe, but if we are updating our technology to keep up with threats and stay safe,” said Taher Elgamal, Chief Identity Officer at IdentityMind.

SSL Pulse is a continuous and global dashboard for monitoring the quality of SSL support across the top one million web sites. SSL Pulse is powered by the assessment technology of SSL Labs, which is focused on auditing the SSL ecosystem, raising awareness, and providing tools and documentation to web site owners so they can improve their SSL implementations.

SSL Pulse is now tracking 198,216 web sites with valid certificates, which represent substantially all SSL sites in the Alexa top one million list. Of those, only about half (99,903 sites) get an A grade, and the rest could use improvement. These details and other key findings can be viewed on the SSL Pulse web page.

“Making SSL pervasive on the Internet is a must in order for the Web to become a safer place,” said Philippe Courtot, Founder of TIM and Chairman and CEO of Qualys. “Solving the implementation and governance problem can be achieved through industry collaboration and better auditing tools that give us visibility into the root causes of these issues and how to fix them.”

The Trustworthy Internet Movement (TIM) is a nonprofit, vendor-neutral organization that leverages the resources of the technology industry, information security professionals, and the venture capital community to resolve the problems of Internet security, privacy and reliability.

The organization will fund and foster collaborative innovation through focused working groups to identify specific issues and create new solutions to address them. TIM, which was launched at the RSA Conference USA 2012 in San Francisco, California, is the brainchild of Philippe Courtot, chairman and CEO of Qualys and co-founder of CSO Interchange.