After a couple of years of research and development, LOK-IT was announced at the RSA Conference 2011 in San Francisco. The product boasted a unique concept of PIN-based hardware authentication. Later that year, at the FOSE 2011, LOK-IT was proclaimed to be the most innovative product at the show.

LOK-IT comes in two versions – SDG005M and SDG003FM. From my understanding, these two are practically the same, except for the latter (FM) holding a FIPS 140-2 Level 3 certification. From the storage space perspective, LOK-IT currently comes in three sizes – 4GB, 8GB and 16 GB.

When the device is used for the first time, the PIN code must be set up. Inside the packaging you’ll get a small cheat sheet that enumerates and explains the appropriate steps required to do so. A strong PIN policy is enforced – the user must setup a code consisting of at least seven digits (the maximum is 15), with repeating and consecutive numbers not allowed. 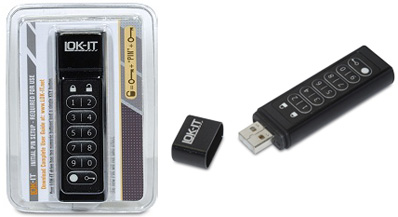 To authenticate to the device, you’ll first need to hit the key button on the bottom of the keyboard. Green and red flashlights (in other cases used for identifying a locked or unlocked device) will blink, you enter the PIN, re-hit the key button and the device can be plugged into the computer as a normal flash drive.

From that moment on, every time you type in your code, you’ll have about 15-20 seconds to plug the device in. If you fail to do that, it will automatically lock itself. The same thing happens when you unplug LOK-IT from the computer.

The device itself has an integrated 3.7 V polymer battery which makes the authentication process much smoother – by incorporating the rechargeable battery in the casing, we can first enter the PIN and afterwards connect the device to the USB port. Without the battery, it would be a bit unpractical to key in the codes when the device is already connected to your computer. 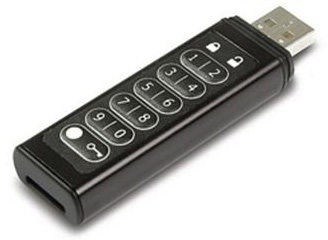 As the authentication process is executed on the device, LOK-IT is completely platform-independent, so you can use it on different computer systems, as well as other devices such as printers, Blu-ray players, etc.Ã‚Â

LOK-IT employs 256-bit AES encryption, which is handled within the internal hardware-based encryption controller. As the authentication is done physically on the device, it is immune to keyloggers. The device is IP57 rated, which means it features limited dust ingress protection and it’s waterproof to a certain degree.

Overall, LOK-IT is a fast and secure flash drive that stands out from the competition because of its hardware authentication feature.