As the 2012 Olympic Games are speedily approaching, users should be aware of the fact that unsolicited Olympic-themed emails are rarely good news.

The latest one of that kind has been spotted by F-Secure researchers, who warn about the booby-trapped PDF that exploits a vulnerability that affects older versions of Adobe Reader and Acrobat in order to drop a malicious executable.

The PDF file does open, and shows the Games’ daily competition schedule (click on the screenshot to enlarge it): 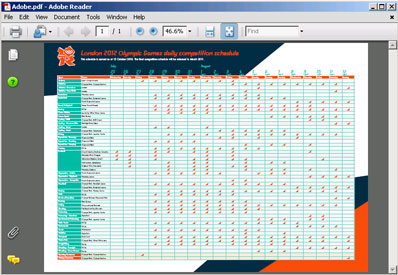 In the background, the exploit attempts to connect to a Chinese domain, which was likely serving malware at one time, or has yet not started doing so.

The researchers point out that unsolicited emails that use current events to engage users are more often then not malicious, and urge users keep their Adobe Reader always up to date.