Latin American Internet users are constantly attacked by cyber crooks who aim to get their online banking credentials in order to perpetrate identity theft and banking fraud.

Two of the most often employed ways to do that is to infect users with malware or to trick them into visiting a phishing site, but this latest attack spotted by Barracuda Labs joins the two: it dupes users to download a Trojan that redirects them to phishing sites.

This particular attack targets Chilean users, and starts with sending them a spam email masqueraded as a message from the popular Movistar messaging service, complete with an embedded link that redirects the user to a malicious domain and triggers the download of an executable.

“Running the file appears to have no effect,” the researchers point out. “No multimedia message displays and no decoy website is visited by the web browser. You are left to suppose that the message is broken somehow.”

But the downloaded Trojan is actually quite busy in the background, as it contacts another domain to retrieve a HOSTS file that is used to seamlessly redirect users visiting legitimate banking sites to their phishing counterparts (click on the screenshot to enlarge it): 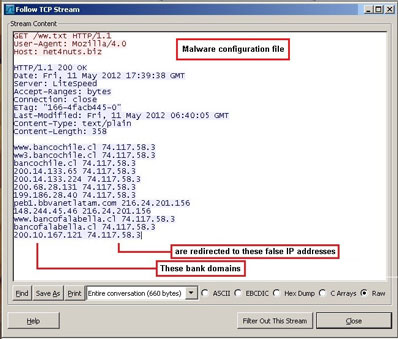 Unfortunately for the infected users, these phishing sites are extremely convincing, as even the URLs displayed in the address bar are spoofed to match that of the legitimate ones. The only thing that could tip them off to the malicious nature of the site is the lack of HTTPS.

“The spoofed website accepts anything offered as a login and password because it has no way to check them for validity. Instead, it saves them to use for bank fraud and identity theft,” the researchers shared. “We know something is wrong with this website because after accepting false credentials a broken webpage is displayed. Unfortunately, by the time someone using an infected computer sees this broken page it is too late – their credentials have been captured by the malicious server.”