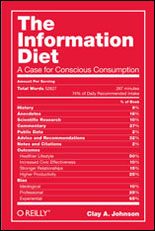 Clay Johnson is best known as the founder of Blue State Digital, the firm that built and managed Barack Obama’s online campaign for the presidency in 2008. After leaving Blue State, Johnson was the director of Sunlight Labs at the Sunlight Foundation, where he built an army of 2000 developers and designers to build open source tools to give people greater access to government data.

The book is divided in two parts: the introduction and the part that teaches how to implement the “Information Diet”.

Too much of the wrong kind of information is as harmful as too little of the right kind. While the latter may lead to uninformed opinions, the former can be the source of some really ignorant ones, claims the author.

In the introduction, he dedicates a chapter to the changes in food production and consumption in the last century that led to an obesity epidemic in the Western world, then in the next does the same for information and the new media.

He then compares the two, pointing out that most news outlets follow the successful formula of not giving consumers what they need (balanced information) but what they want (affirmation).

This part of the book ends with a chapter explaining the symptoms of “information obesity,” and is then followed by the part where habits that form a good Information Diet are enumerated and explained.

You’ll probably find a lot of things you already know on an unconscious level such as, for example, that the closer you come to the source of the information, the more likely it is that it will be correct.

As every other diet, this one requires you to exercise willpower and to really think about what you consume every day. It’s not going to be easy, but here is a book that can start you on your way.

True to the book’s message, the author does not repeat himself unnecessarily, but sticks to the subject in a well-organized and orderly way. For such a relatively short read, “The Information Diet” provides much food for thought.

Many of us have probably come to some of the same conclusions as Johnson and have likely implemented some changes in the way we consume information – I know I did.

Still, I did it to lower my stress levels, and haven’t consciously thought about the even more harmful consequences that consuming “junk” might have on my way of critically processing information. This book was definitely an eye opener in that respect.